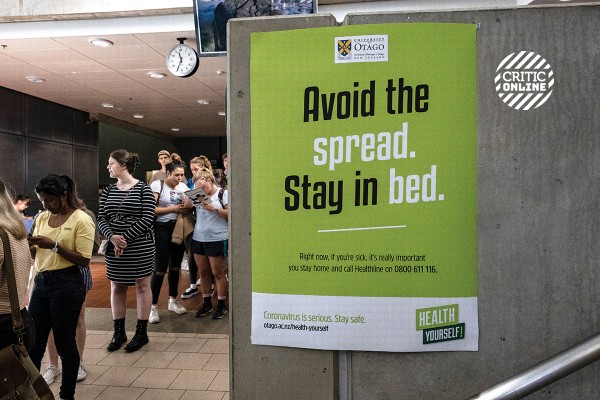 Opinion: Otago Fucked Up with Covid-19

Doing the bare minimum until the last second is fine for assignments, not pandemic responses

The University of Otago fucked up their response to Covid-19.

Otago’s approach was: we’re waiting for the government to tell us to shut. As soon as they tell us, we’ll do it, but we will not second guess the government. The University wanted to stay open until the last second, rather than make sure its students could go home and prepare for the pandemic. They were cutting it fine.

The result is that Otago students had two days to get home before the country went into lockdown. Students from Canterbury, Auckland, and Victoria, were able to travel home and be with their families as the Covid-19 epidemic developed over the weekend. Otago students were not.

On Friday 20 March, just five days ago, Harlene Hayne emailed students to say that the “University is remaining open as it currently has no cases of COVID-19 and there remains no community spread in New Zealand.” That was the day that other universities around New Zealand decided to move to online lectures.

On Saturday, when New Zealand moved to Alert Level 2, Harlene emailed again. “I urge all of you to remain calm at this point and be mindful that the University is prepared,” she wrote. “The University remains open for business.”

The decision to stay open made a difference. Because their lectures were online, students at Canterbury and Victoria and Auckland could go home. They had the assurance that their lectures would be recorded at some point, and that they would not be penalised for missing classes.

Otago students did not have that assurance. We had tests. We had terms requirements to meet in tutorials. We had experiments that were still running in the labs on campus. We had to attend lectures which the University had not confirmed they were recording.

And we had no guarantee that we could go home without being penalised, even as the Covid-19 situation became increasingly stressful and the universal advice was “go home and stay home”.

This didn’t just affect students. Staff were given no time off to prepare for the shift to online teaching. Staff were penalised for putting content online before instructed to do so by the University.

Of course, there was no way the University could predict the future. The approach that other universities took was extremely careful. But the University was dealing with an epidemic and knew that many of its students were thousands of kilometres away from their hometowns. In that situation, extreme care is not too much to ask for.

Otago had a plan to gradually move all classes online. But equally, they were aware that the situation could change rapidly. They emailed us to say as much. And instead of responding to the pressure to put lectures online, they put it off.

Some students went home over the weekend. But they were risking missing lectures and losing out on terms requirements by doing so. The University refused to give students the certainty of knowing that they could be with their families at this stressful time until the last possible moment.

We didn’t have the chance to get back to our whānau because the University wanted us to keep calm and carry on. They wanted to pretend everything was normal, even as borders closed and the numbers of Covid-19 cases rose.

Throughout the epidemic, Otago’s approach was the bare minimum. When mass gatherings of 500 people were banned, the University removed seats from St David’s Lecture Theatre so that there were only 499 seats. Health Science students could be part of multiple groups of 499 people, bringing the number of people they were in contact with over 500, but the University would technically comply with the rule.

In many ways, the University’s approach to Covid-19 is like watching my flatmates black out on the pharmacy flat crawl. I know they’ve had too much vodka and something bad is going to happen, but I don’t want to deal with the problem until I absolutely have to. Inevitably, I do have to deal with the problem, because they end up vomiting in the lounge at 4.00pm. But I could have made the problem much easier on myself and my flatmates by hiding the vodka a few hours earlier.

The University of Otago could have made their Covid-19 response much easier if they had taken action earlier. But here we are, vomiting in the University’s lounge.