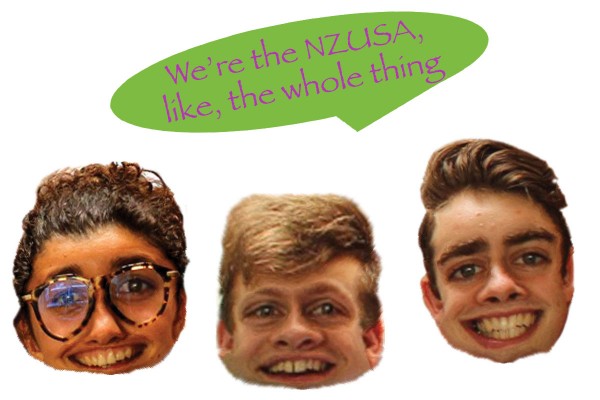 Who is NZUSA and Should You Give a Fuck?

NZUSA is the New Zealand Union of Students’ Associations, and they have copped their fair share of shit over the years for being inaccessible, secretive, and - worst of all - sucking hard.

This year, however, President Isabella Lenihan-Ikin and co-Vice Presidents Matthew Schep and Sam Smith (both former OUSA execies) plan on being different.

Critic will reserve judgement until we see these promises in action, but in the meantime, who are these people? What makes them the right kind of people to be lobbying the Beehive on students’ behalf? And, most importantly, do they smoke weed, or are they fucking squares?

Isabella is the National President of NZUSA. She likes to host dinner parties. She cracks jokes when she’s not giving earnest speeches on debt-free education and student representation. I’ve got a full page worth of her impassioned quotes and pragmatic solutions she’s devised to solve your problems. She wants to mobilize 400,000 uni students as a force for good. You’d like her.

Isabella reminds us that “we wouldn't have gotten a $50 increase in living loan costs and student allowance if NZUSA wasn't in existence. 10, 15 years ago, NZUSA was pushing really hard on those issues, and we’re now seeing the benefits.” She reminds us how small steps amount to big change, and that NZUSA is trying to be more vocal about their goals.

It’s hard to be “cool” when you’re any sort of governmental body (and they get that), but an extra $50 goes a long way. Cheers for that one, guys.

Does she smoke weed tho? “I don’t smoke weed, but I have smoked weed. I’m not a regular.”

Her two VPs are good lads as well: Matthew is organizing the Ōtepoti Pride Festival and trying to get outside more. Sam wants to study public policy abroad and likes to go to the theatre. Both are Otago-alumni-ish. Matthew was the 2019 Postgraduate Officer on the OUSA Exec while finishing his Masters in Politics, and Sam Smith was our 2018 OUSA Finance Officer before he fucked off to finish his undergrad at Vic Uni in Wellington. Traitor.

Does Matthew smoke weed? Not at all.

Does Sam? He said no, but Critic remains dubious.

The current team is focusing on debt-free education, though they have inherited a number of campaigns from old NZUSA executives, like Thursdays in Black. As well as debt and sexual violence, they fight for stronger student union voices in their respective Universities, rent controls and flatting standards, and many other issues. It is busy work, and lends itself to half-assmanship. But they signed up for it, so don’t feel too bad.

“We are one organisation in a puzzle of organisations that work on these issues,” said Isabella. “We represent different communities, and they’re key to bringing together the student movement.”

One voice is hard to hear, but 400,000 voices together are pretty hard to miss. “We need to think big. We have the ability, we’re gonna be here, and we’re gonna face these big societal issues.”