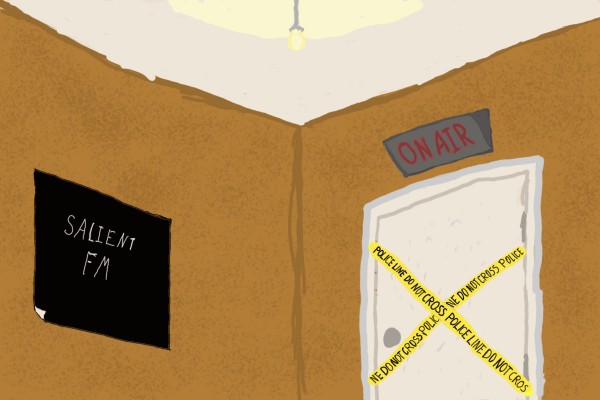 Kii Small, the editor of Salient magazine in 2019, said it was a “pretty big disappointment”. He continued, “That’s what happens when the students’ association can control the media.”

Jazz Kane and Nav Nair were the station managers in 2019. When asked how they found out about the shutdown, Jazz replied, “we basically didn’t”. He said that “there was no communication and we were given no reason. We had no idea why or what was happening.” When they began the recruitment process for 2020 managers, they received an email informing them that the station was no longer there.

Salient FM was similar to Radio One, but different in some technical respects that Critic does not fully understand. Despite its name, the station only broadcast over FM at short range. Usually, it live-streamed on the Internet.

“I was gutted,” Jazz said. “This is an institution that I’d been a part of for the past five years, and it’s been active and up and running for closer to 20 years.” Nav added that “there were a bunch of little things that could have been changed,” but no reason that justified shutting down the station. “Something just didn’t add up,” Jazz said.

“No decision was made to shut down Salient FM,” claimed VUWSA CEO, Matt Tucker. Instead, and on a different note entirely, “a decision was made to ensure Salient was relevant and had the tools to grow engagement with the student body by suggesting a shift to podcasting.”

To carry out this decision to make Salient relevant, “VUWSA entered the Salient Offices, and had to dispose/recycle over 2000kg of items,” Matt said. They did this without the knowledge of any Salient staff.

Matt said the decision was made without sufficient information because Salient failed to complete their 2019 self-review of “all parts of Salient”. He said that “sufficient time was given and reminders sent”.

VUWSA added "students expect VUWSA to hold every dollar of the Student Services Levy (SSL) to account. The decision to conduct a review on behalf of Salient was made with all our students interests at heart and to help ensure continued funding for an editorially independent student media."

Kii said that the self-review was completed. “It’s quite rich of VUWSA to be talking about not receiving it on time or not receiving it at all, when really they should be addressing the $16,000 deficit from the last budget.” He thinks that “VUWSA have a lot to answer for, instead of blaming Salient and taking away our resources.” According to VUWSA and their 2019 annual report, however, this deficit does not exist.

VUWSA also reject that this self-review was completed, and said that Salient 2019 had "not meet the requirements for self-review, nor did they provide adequate reporting to support their funding coming from the Student Services Levy."

The current Salient editors, Rachel Trow and Kirsty Frame, also missed out on consultation about the shutdown. “The cut was decided by VUWSA, and because of the timing it was out of our control as incoming editors,” they said in a statement. Critic understands that the shutdown occurred before the co-editors for 2020 had been hired, but after the 2019 editor had finished working.

The Salient editors will now be focusing on Salient Cast, their new podcasting service. VUWSA see this as a new, direct way to present the student voice and shift the focus away from music. The former Salient FM managers said that the decision should have been made by the Salient editors rather than VUWSA. The editors “have the right to choose the format in which Salient is going to be presented,” Jazz said.

Nav and Jazz do not see podcasts as a good alternative to live radio. Salient FM has made podcasts in the past. “What has really been ignored in that conversation is that music is often an integral part of the student voice,” Jazz told me. Nav agreed, and added that podcasts would not have the same contributor involvement. “I’m glad podcasts are still there, but I think it’s a step backwards,” Nav said.