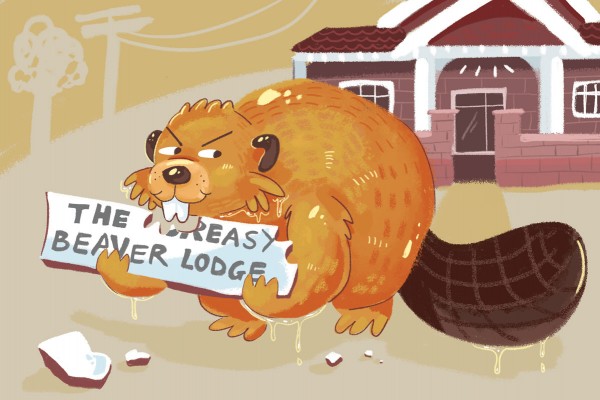 Is this totalitarianism of the highest degree?

The iconic flat “the Greasy Beaver Lodge” has had their flat name physically and spiritually confiscated by their Property Manager, Jenny Adamson. The flat sign was removed mid-December last year without tenant consultation. What followed was a wild tale of miscommunication, misinformation, and stupid flat drama.

Rachel*, who alerted Critic to the incident, was a tenant in 2019, though was not present herself when the sign was removed. Second-hand information from her flatmate alleged that the sign was taken without notice by the Property Manager’s handyman, Billy*. He allegedly told the tenants that the order had come from the University, who were allegedly cracking down on “offensive” and “misogynistic” flat signs.

Billy was referring to a closed meeting held by the University of Otago, which discussed the possible removal of “misogynistic” flat signs around the student quarter. Billy was not in this meeting, but the property manager, Jenny, confirmed to Critic that she had been.

A University spokesperson denied giving the orders, and said, “The University recognises that the flats are private property and that the removal of signs is the sole discretion of the landlord or property owner.”

Ron, the property owner, told Critic that the flat was called “the Greasy Beaver Lodge” when he bought it. He said he had found the name ‘odd’ but did not think much of it. According to Ron, Jenny had informed him that the University had made this decision “in a committee”.

When Critic contacted the property manager, Jenny said that she removed the sign of her own free will, and confirmed that the University had not given the order. She said that the Greasy Beaver sign was “offensive and should be removed” as it does not “depict nicely what the flat is about”. She also said that “landlords should have a say” in what the flat was called.

She had first heard the idea of removing allegedly offensive and misogynistic signs from a meeting hosted by the University involving multiple community stakeholders. Although she said that the University ruled it out, she decided to remove the sign herself because “I thought, ‘that’s quite right’”.

Both Ron and the tenants emphasised that Jenny is a great property manager. Rachel said she is “really lovely” and Ron said he had full faith in her management of the flat.

Following Rachel contacting Critic about the issue, someone alleging to be a current Greasy Beaver tenant anonymously called Critic and challenged the point of the story. She said “it’s not even a fucking story” and that the tenants “literally do not care” about the removal of the sign.

Other students disagreed, and did care. One student Critic interviewed said “that’s fucked” when the situation was explained. Another said that they believed the value of their flat was “directly linked” to name recognition of the flat, and couldn’t imagine the sign being taken away. Most students, when asked what they would say to their property manager if they also tried to take away their flat sign, said they would tell the property manager to “fuck off”.

When Jenny was asked if she was concerned about the loss of history, she stated “some things in history can stay in history”.

“I wouldn’t want my daughter living in the Slutbox”.

She also said the new tenants get to give the flat a new name "that is respectful to the property. So long as it is an acceptable name.”

* Names have been changed.