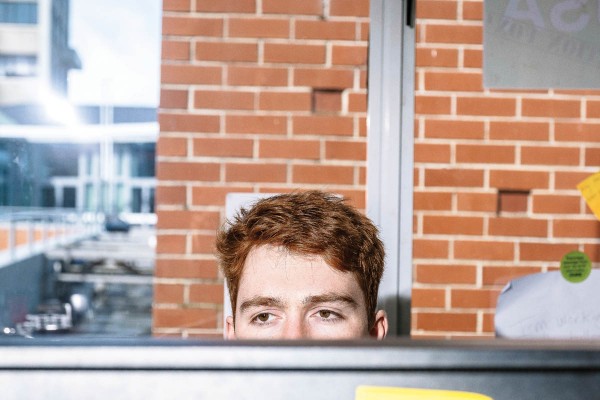 OUSA President James Heath is departing OUSA after three years of executive bullshit. Critic’s intrepid reporter Nina Minogue sat down with the local sex symbol to talk about the year that has been and the years to come.

What’s your best memory of being President?

There’re heaps of them. I definitely won't forget the School Strike for Climate March where Will and I lost our voices leading chants. I also won't forget the vigil after the Christchurch terror attacks. Having to emcee with 18,000 people in front of me was pretty terrifying, but it was a very significant time in our community.

Did you ever have a moment where you questioned what you were doing?

I don't think I ever questioned why I was in the job. OUSA President is an amazing job and I am so glad I did it. I love it to bits but it is tough. There were definitely times where I was like ‘why am I putting myself and friends through this?’ But I’ve always been glad I’ve done it.

Did your time on the Exec prepare you for being President?

What has been your biggest lesson?

There have been so many. Through leadership, I’ve learnt that you have to make a call sometimes. Not being a perfectionist is another one. When you are being pulled in 50 different directions by 50 different people you can’t do all 50 at 100%. You have to be comfortable not being perfect and doing the job at maybe 70%.

What has been your biggest achievement during your Presidency?

Councillor Aaron Hawkins said he felt like I had turned the tide for OUSA – since we’re now political and engaging students. We are running a massive engagement campaign for local body elections, submitting on annual plans really successfully, we are getting media on political issues, leading marches. That was my goal, to make OUSA political.

In 2018 you said your most important personal goals for 2019 were to “get back into hockey” and look after your physical and mental health. Have you done this?

I have not played hockey this year. I thought I could definitely do that and OUSA but I couldn’t. It’s taken up so much time. I try look after myself by being honest. If someone asks me how I am, I will say, ‘I’m tired I’m having a bad week’.

Are you satisfied you fulfilled your 2018 election promises? What would you do differently with hindsight?

I would’ve put more effort into a mental health campaign. I'm doing some things at the moment. We have Suzy Cato coming down next week; I've worked with Hannah Morgan with Swim Straight for Life. With organisations like Silverline operating in that area it’s not like it’s uncovered territory. I think we have had a great year.

With the issues arising concerning Exec pay, do you think your Executive has been adequately held to account?

I agree that our current pay system is broken. I literally live off my honorarium and if it was cut I wouldn't be able to pay rent. We judge performance on second-quarter, which then affects the pay of the third. I do still think we can hold members to account.

How do you feel about the way things with OUSA Welfare Officer, Kerrin Roberston-Scanlon, were dealt with?

I make sure I follow best practice, and I stand by the processes I followed. It was fair, supportive and appropriate. Though it was a difficult situation, I am 100% confident that we did what was right.

How do you feel about being a cult personality?

It's very weird. It is something I don't really believe to this day. In the last few weeks, I've had someone come up to me and ask for a picture of me for a cut-out for a secret Santa gift for one of their flatmates. There's a current cut out at Aquinas College. It's very strange.

What do you think about your sex symbol status?

This is more strange. I don't think they've got it right but hey, it could be worse.

What do you really think of Jack taking over?

I think Jack will do well, but with anyone coming into the role, there's a lot to learn. And I think he needs to prepare himself for a big step up because it will be a tough year. He needs to get ready for that and step up. But he will.

Any advice for him?

You've got to back yourself. You’ll be given advice from people on what you should do or what you shouldn't do but at the end of the day, you have to make the call. You have to back yourself and stand by what you do. It’s all very well trying to making compromises and balance perspectives but sometimes you just have to make a call. If you spend too long trying to make a decision it’s not leadership.

I am doing a Master of Politics here at Otago next year. I'm not leaving Otago; [laughs] I'm staying far away from OUSA. I want to take a year off to look after myself as it’s been an intense year. It will still be a full-time commitment, but time away from work responsibilities and an opportunity to dive into academic studies.

Why do you have the 2018 Critic article criticising you framed by your desk?

It’s going to sound like a prepared answer, but I think it's important to hold onto your achievements as well as your criticisms. It was a very public criticism of me and though I might disagree with parts of it, it’s really important to remind yourself of that and ground yourself. That article led to a lot of personal growth so it’s an important part of my – I won't say ‘journey’, it’s too cliché – but it's just important for me to hold on to and not forget.

Will you miss OUSA and stop in to say hi?

Yeah, once every two months. I don't know. I will be available for advice. I might even write for Critic if you’ll take me. Not assuming that they do want me.

Will you miss me?

I never ended up asking this question because I think James saw it on my laptop and I got embarrassed and shut the lid. James, I will miss you.