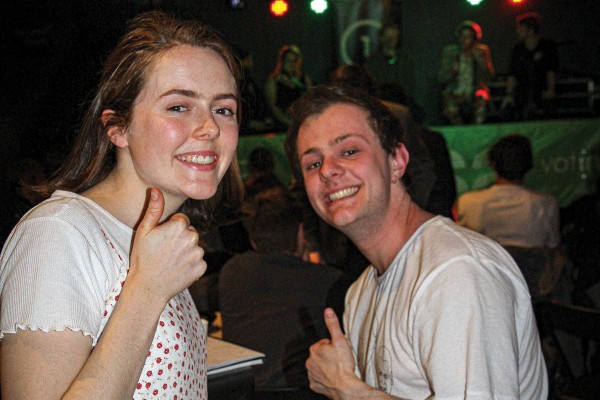 This week is the Otago University Students’ Association student elections. For those that don’t really give a fuck (fair), OUSA is the student union that represents you, entertains you, and fights for you.

OUSA runs O-Week, Starters Bar, Student Support, and Clubs and Socs, as well as owning Radio One and Critic. They push back whenever the Uni or the DCC try to fuck with you. They lobby the government to actually care about students.

Vote in the election. You can do it online. Go do it now. At worst you’ll be making some sad nerds feel like people actually care about them.

It’s hard to know what kind of exec member someone’s going to be before they’re elected, but Critic’s spent a long time trying to find out. Pretty much the entire news section is analysis of the forums and debates so that you can have some idea of who to vote for, beyond just the person you’d most like to smash.

The most important race, and one of the hardest to call at this point, is for the Presidency. I genuinely don’t know who’s going to win. Jack Manning stumbled through the debates and didn’t come off well. His policies are also pretty generic things that OUSA will be doing regardless. But then again, the forums were collectively watched by a few hundred people at most. Jack was elected to OUSA last year without even being in the country, so he must have a fair bit of support out there. Still, I think most of Jack’s votes will come from people who know nothing about him.

Sam Purchas has great chaotic energy. He did well in the debates, and he’s well known around campus. He’s visually distinctive, and that works in his favour. Honestly a lot of people just vote for the person they recognise, and it’s hard not to recognise Sam. He might struggle to have a mainstream appeal though, and his politics tend to turn people off, even if he’s distanced himself from the ACT party he stood for in the last general election.

Will Moffatt is trying to emulate the great scarfie Presidents like Logan Edgar by talking like the common man and not taking any shit. I don’t know if he succeeds at that, but he performed strongly in the debates and his whole centre-right fiscal responsibility / breatha thing will go down well with your average commercebro. But also this is the OUSA elections; you can definitely overestimate how many breathas can actually be bothered to vote, and, like Sam, Will’s politics might grate with a campus that voted red overwhelmingly last election.

Alternatively, we could just get rid of all of this shit and, instead of having an exec made up of five 10 hour positions, four 20 hour positions, and a full time President, we could just have 170 one hour positions, or a “Mega Senate” as I like to call it. The Mega Senate would guarantee that there’s so much of a shit show that people will care about OUSA, and there’ll be so many people elected that there’s a high chance some of them would actually do something. Also it would give Critic guaranteed content for ever. There’s no way that 170 people could last a week without a major scandal breaking out. It’d be great.

If think you can get 60 odd people to turn up and support you, why not call a call Student General Meeting and actually do it. Seriously. There’s nothing stopping you. You can actually do that. You’ll need a two-thirds majority vote, and a lot of people will be really angry with you, but I’ll buy you a drink, look deep into your eyes, and say “You did a good job, I’m so proud of you”. Sometimes that’s all we can ask for.