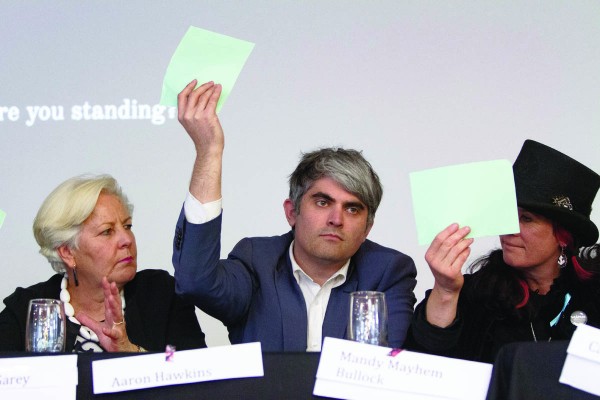 Critic’s winners of the DCC Mayoral Forum, hosted by OUSA and the University, are Mandy Mayhem-Bullock and Aaron Hawkins, with an incredibly honourable mention to Bob Barlin. But, to be honest, hearing fourteen people talk for about five minutes each doesn’t give a great idea about who to choose for mayor. It just kinda made them all seem boring as hell.

Our breakdown of how each of them went is measured by how many times they actually talked about students in their ‘Why I’m Running/What’s Important’ answers, how many times they talked over the allocated times, and any memorable moments. Also, when we say they were told to ‘shut up’ it means James Heath had to literally tell them to stop talking.

Straight off the bat Scout Barbour-Evans clapped back at Harlene’s microphone instructions by saying that they knew how to turn on a microphone, after Harlene told them they weren’t using it properly. BOOM ROASTED. Being an actual student meant that they talked about students and what they’d do for them, though we can’t remember what their specific policies actually are. Really, Scout didn’t have too many memorable answers to questions, but they get bonus points for being a student and having a high sass factor. They only had to be told to shut up once, which was far fewer than most candidates.

Malcolm didn’t talk about students in particular except to reminisce about his own time as a student, which doesn’t actually count. Memorable moments were saying that people should “keep an open mind” about climate change, not supporting weed legalisation (lame) and wanting to ban 1080 (lol). He also had to be told to shut up three times by the moderator.

Rachel is a kind old lady with a super positive and passionate attitude. But from the little opportunity she got to speak, it was hard to discern any depth to her policies. Which is disappointing considering she is already on the Dunedin City Council. When talking about shit flats she basically told students to ‘open their windows’ to fight mould (she used to be a landlord, after all - she knows who’s to blame). When asked about the biggest problem facing students she literally said… hills. She said that Dunedin was beautiful and students should go out for walks on the different tracks that exist and that this was the best way to combate stress and help with mental health. What is this, The Sound of Music? (Also I’m bitter because she uses a lot of feminist imagery and slogans in her campaign, but has no feminist or gender-based policies. When Critic asked her one-on-one why this was, she just said “everyone should be liberated” and when she admitted she has no solid feminist policies she said it “does point to a thing I need to do”.) Got told to wrap up her speech twice.

Jim has already been on the City Council and has a bit more bang to his ideas than other candidates (though he does just come across as a less charismatic Aaron Hawkins). He also knew his crowd and how to talk to students, describing how he thinks the Council and OUSA could work together. Didn’t really have much of a wow factor though. Got told to wrap up his speech once.

Talked a lot about science and business stuff. Not really much to say, unfortunately. Got told to wrap up his speech once.

Richard identified solid issues facing students, such as fixed-term 12 month leases that should only be 9 months, but did not come across as confident as the other speakers. Bonus points for being a mature student (coming back to uni is hard - freshers are mean). Unfortunately, anecdotes about your own shit flatting experiences does not count as policy. Got told to shut up twice.

She came in hot saying she wasn’t “going to make promises I can’t keep,” and then opted for saying no policies instead. Again, disappointing, as she’s a current city councillor. She spent so much time talking about how great her daughter was that we wish her daughter had just ran for mayor instead. Told to shut up once.

Aaron is one of two sitting councillors running for mayor that actually had policies, so he was a very welcome breath of fresh air. He’s charismatic, passionate, and kept giving Critic shoutouts, which definitely helps. When candidates were asked to talk about the biggest issue facing students, he had a list of problems almost as long as his brag list of how many student protests and campaigns he’s been involved in. Fucking bless. Was told to shut up once.

Mandy came to the Student General Meeting the week before???? If that wasn’t crazy enough, she is a former circus ringmaster AND former NZ representative in Taekwondo. Both very important skills she could bring to the mayor’s seat. She is incredibly charismatic and tapped into her Waitati community, and said very passionately that she wants to campaign to get students more money from the Government. Yes please. She was told to shut up three times, but she spoke so well that no one minded she was going over.

She didn’t introduce herself so Critic had to spend a hot minute squinting at her placard. She had an actual policy response to every single question, so that was dope, but unfortunately she got lost in-between candidates with the ‘it’ factor. Told to shut up twice.

Student orientated: No, but we forgive him.

Ok, sit down and get ready. Bob is a kind old man with a heart of gold and is currently finishing a History degree. He’s a taxi driver, which means he’s literally seen you at your lowest point but loves you anyway. His big thing is ‘teamwork’ and how everyone needs to coordinate and be cooperative if anything is going to be achieved. In his younger days he worked in the Military, the United Nations and the Red Cross. He only had one weird moment when he said that OUSA should just “ban” students from going into shit flats to solve the student slum problem. He made up for it when he said he will always “show people [students aren’t] loud drunks running around on Saturday nights causing mayhem. I drive you and you’re always very polite.” Had to be told to shut up twice (don’t you respect the troops, James?).

Who’d have thought that Daddy Vandervis wanted to ban 1080?? He also refused to raise his ‘yes’ or ‘no’ paper when the panel was asked if they believed in man-made climate change. Because everyone gets enough of his hot takes on Dunedin News, Critic measured his performance by the following.

Critic estimated that Vandervis was 60% more likely to roll his eyes when Aaron or Rachel spoke. He also kept turning to the poor student slave running the powerpoint to give her unwelcome attention/instructions. Told to wrap up his speech just once.

Ah, Finn. We feel really bad because he clearly means really well, is super intelligent, and would work really hard. He was probably the second least confident speaker to Malcolm, though, and some points that were really good weren’t said as clearly as they could have been. God fucking bless, though. Was told to wrap it up once.