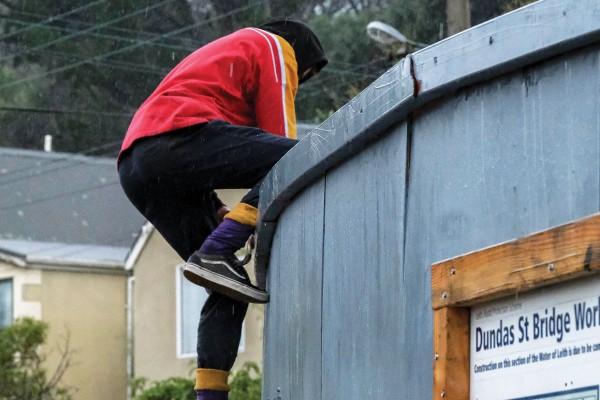 Storming the Dundas Wall Kind of a Success

Despite multiple people storming the Dundas Street Construction last weekend, the Otago Regional Council (ORC) is “really pleased that nothing came from the storming of the Bridge” according to ORC Communications Channels Manager Eleanor Ross.

Ross said that the storming was a “huge concern for us because as you can see, there are a lot of hazards there [gestures to the massive hole in the middle of the bridge] where it’s likely there could in fact be a death”.

Despite the ORC saying that there would be extra security on the bridge over the weekend, there was no one at the site. Ross said that the ORC made the decision to have off-site security on-call in case anyone turned up. Ross said they were “on tender hooks all day checking the event page and waiting for photos or instruction from ‘We Soon Bro’ to say the storm was on”.

“Thankfully, no one actually fell or damaged any equipment which was of a lesser concern but yeah, we were mostly concerned that if they are trying to cross some of these beams - you can see all the lashings and uneven surfaces - in the rain and alcohol combined it would have been extremely unfortunate if something had happened.”

Critic was at the Wall at 5pm, when the event was supposed to go down.

The first man we saw leap into the free West Dundas did so unceremoniously. He landed awkwardly into a puddle as we cheered him on, and by the time we asked, “how do you feel to be free?” he’d shaken himself back to normal and sauntered off, completely blanking us. We asked a hopeful “what will you be doing now you’re in West Dundas?” and, again, he ignored us.

The next person who crossed did so with a friend. These hard cunts did it right in front of Campus Watch CCTV, the absolute fucking mad lads. We asked “what are you going to do now that you are in West Dundas?” and, still perched on the wall itself (we only assume that the East Dundas soldiers were being distracted by brave comrades, to have this much gall), he said, “oh, yeah, not sure”. We asked, “how does it feel to be free?” He said, “oh… better than… being over there”. We thanked him and his bashful friend.

Project Manager Oliver Snyder said that local residents coming onto the site “is a big concern for us”.

“We’ve put up a lot of fences and developed those over time to make sure they are as robust as possible but people continue to jump the fences and make their way through,” he said.

When this intrepid Critic reporter asked why the ORC didn’t start construction on the bridge earlier over summer, during the four months when no one was here, ORC Operations General Manager Gavin Palmer said “We looked at construction during summer, since daylight is longer, weather conditions are more favourable” but said that they had to wait for the previous stage of the flood prevention works to be done before they could start.

“We don’t want to open up too many points on the Leith exposing us to flooding where we have to respond during a flood,” he said.

An investigation into some foundation depths of nearby properties also delayed starting.