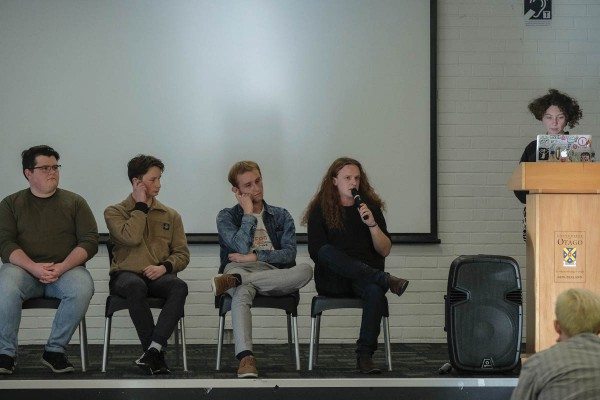 Who to Vote For in the By-Election

As per usual for OUSA events the seats in the Main Common Room were vacant for the candidates forum, all bar the current Executive, the candidates’ friends, and depressed Critic reporters. But no worries, we’ve assessed the quality of the candidates for you. For the more discerning voter we live-streamed the thing on our Facebook.

Matthew “The Only Post-graduate Candidate” Schep

This is Matthew’s third shot at running for the OUSA Exec, and he’s finally found the silver bullet: an uncontested race. Matthew is very sincere (he made a ransom-note style application for the Critic Blind Date earlier in the year, with cut-out magazine letters and everything) and truly cares about student politics. Vote for him unless you think having no Post-grad Officer at all would be better.

Daniel “Was On The Exec A Decade Ago” Stride

Daniel wants OUSA to be like it was 10 years ago (which is not necessarily a bad thing) and said he’s in love with OUSA. Okay. While it is clear that he’d bring his own vision and way of doing things to the Exec, it might just leave the team with more things to do and less time to do them. His no.1 goal is to repeal VSM and his no. 2 goal is to give the OUSA constitution a “spring clean”. These goals would have made him the nerdiest person in the room if the entirety of the current OUSA Exec weren’t there as well. He also had some cringey but memorable quotes like “If OUSA doesn’t stick up for students, who the hell will?” and “NZUSA is a bunch of fuckwits, but they’re the only fuckwits we’ve got”. Daniel is a mature student and it’s a little confusing why he’s running for OUSA when he’s just been admitted to the bar. He also has a track record of running in six OUSA elections and getting on to three, and being forced to resign from one after a police diversion. He definitely gives way too much of a fuck.

Georgia has already spent six months doing admin and policy work as Campaigns Officer. She might not care about OUSA as much as her opponent (also not necessarily a bad thing), but there is more of a chance she will follow through plans the current Exec has made for the year, rather than pushing through a new vision. Although, on the other hand, she took half a year to organise a one-week campaign - Enviro Week - so that doesn’t bode well. One of her goals is to create a system of accountability within the OUSA Exec to make sure that everyone is completing their work and getting paid for what they’re actually doing - which is relevant, since the last Admin VP is guilty of that. She is definitely a more #relatable candidate than Daniel, saying that she is a former suffering Castle Street resident and that (in reference to the BYO regulations) half a bottle of wine is “not enough for anybody”, but overall was less inspiring than her counterpart. Ups to her for being the only woman in the entire by-election though.

John “Cheerleader for OUSA (When Not Playing D & D)” McWatters

John wants to promote the campaigns that already exist and ensure OUSA makes a genuine impact on students’ lives. His past experience is on the Computer Science Society and OUSA Education Committee. He also wants to motivate other students to get involved in OUSA stuff and get on board with existing OUSA goals, like fixing the class rep system to stop being tokenistic. John wasn’t the most inspiring candidate on the stage, but seems like a nice guy and was pretty humble to turn up late and still deliver. Being the last person to ask the awkward question of what his time management skills are like, he said the choice quote “I’ll have time to work on OUSA stuff, it’s a better use of my time to be on OUSA Exec than at home playing video games”. Love the honesty.

Ben wants to boost existing campaigns with his practical experience as the 2019 OUSA Capping Show Director, where he worked with OUSA’s staff and budget and marketing bureaucracy, which are pretty top quality credentials for the role of Campaigns Officer. He scores points for having the most original campaign idea - to establish a Queer space - which was cool. He said he wants to make OUSA something that students are actually seeing, rather than just being a “big green tower”. Capping Show also gave Ben the skills to “sneak things that students maybe don’t want to hear into packages they like” which is also a good skill for running OUSA campaigns because, you know, OUSA is pretty boring.

Adam brushed over the campaigns bit of the role of Campaigns Officer, saying that the position “is a shit role that shouldn’t even exist, as Critic would have us believe” - okay Adam, why are you running? He also was VERY enthusiastic about how sitting on University committees is the most important bit of being the Campaigns Officer. He also suspiciously said the words “fuck” and “mahi” a few too many times. Adam is clearly involved in a lot of stuff, but he talked too fast to explain much of it.

Paddy “One of the Sextet Guys” Manning

Paddy said that the Campaigns Officer is the “spirit animal” of the student population and jumped on board a lot of existing campaigns, including Georgia’s sustainability campaign and luring students to enrol to vote using dumplings. He also wanted to enrol students in halls because, and we quote, “things spread like wildfire in halls”. What’s sexier: voting or herpes? He is a passionate speaker, though, and definitely wins points for navigating talking about sexual violence while the others addressed it really awkwardly. Also, his hair is very lush and very ginger, and honestly would give James a run for his money.