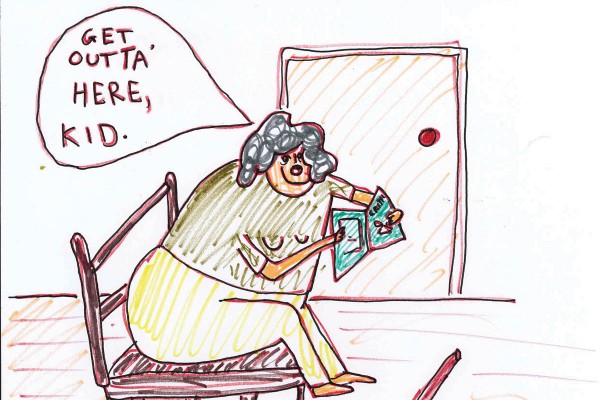 Get off my fucking lawn. I can’t believe I actually have to say that. It’s way too soon to be looking for flats, and I don’t want to talk to you, so the roaming groups of star-eyed undergrads wandering around the inaccessible hilly back ends of nowhere need to stop hammering on people’s doors and asking to be let in. My flatmate is probably going to chase the next group off with a shotgun; we are surly, curmudgeonly postgrads who should be left to post unrealistically happy graduation photos on Facebook and scramble around desperately for a job that wants our degree. Every elderly more-than-a-third-year I’ve talked to agrees – we don’t live up on hills to encourage random social interactions. Why do I keep being dragged out of bed by people expecting a tour guide, people who my landlady knows nothing about but who keep cold-calling the poor woman to ask her about 2020?

Turning up in June isn’t really endearing behaviour to your future landlords. In the interests of asking someone who might know shit, I found a real estate agent. The look of soul-deep tired horror in her eyes was illuminating. “The students do seem to be earlier each year and if we don’t have our flat lists ready, I assume they’re taking it on themselves to find what they’re looking for by door knocking”, Chris Murphy explained. Apparently I’m not the only one who doesn’t want to think about 2020 yet – nearly all of the property owners haven’t started thinking about it either, which is why those flat lists aren’t out. You might have started looking for places, but the places aren’t ready to start looking for you.

People (and proctors) wander in and out of flats on Castle and Hyde all the time, where unlocked doors are as much a part of the culture as marinating yourself in cheap alcohol, and the residents are helpfully okay with being asked for quotes for weird critic articles, “get amongst, y’know” is pretty much engraved on the street signs. But that doesn’t apply to every street within walking distance of the Uni, and my God, people, it’s July. We are literally at six out of twelve months. Don’t you all have Health Sci exams to do? The further you edge away from the Uni, the more crabby ancient fossils you’ll encounter who won’t talk to you yet.

Look, come back in August or September. I’ll happily show you around and take someone from your group aside to tell you about just how evilly steep the hill I live on really is. The landlords will actually be interested in hearing from you, Trade Me and the real estate people will have done most of the searching for you; everything will be easier. I can’t survive the next three months with people trying to creep through my front door. Please, just wait.