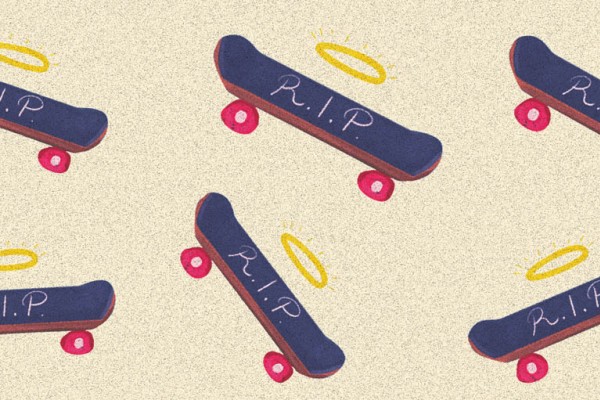 A student with a physical disability is saying that the wheeled transport ban on campus is more than just an inconvenience for skateboarders; it does not consider the needs of students for whom walking around campus is not an option. Disability Services said students will be able to apply for an exemption to skate on campus.

On May 14, the University Council voted to ban skateboards, bikes, scooters and other ‘personal transport devices’ from being ridden on campus. The ban’s been rolled out as the ‘Walk Your Wheels’ campaign, with new signage and reminders around campus. It is focused on reducing the health and safety risk posed by wheeled transport users zooming around, particularly at times of peak foot traffic.

Busy thoroughfares can lead to accidents, especially when skaters might be weaving their way through crowds of people. But, the ban has caused considerable difficulty for Andreas. After being run over by a forklift, Andreas said “walking around campus isn't an option for me”. He said, “it would appear the Uni property management [hadn’t] even thought that the ban might affect people [like me].”

But, he has been in touch with Disability Information and Support who have “been great” and are “making slow progress”.

Melissa Lethaby from Disability Information and Support said, “all students with a documented need will be eligible to apply for an exemption” from the ban. She said her office is “100% supportive of the Walk your Wheels initiative as a number of students we work with have reported feeling unsafe on campus due to the sheer volume of fast moving skateboards on campus”. She expressed confidence in the ability of the university bureaucracy to process timely dispensations, stating that “the first exemption requests only came to my attention on Tuesday”.

Lethaby said her office has been kept “well informed” around the new policy and contributed to its wording “in collaboration with the disabled community”. She is confident it intends to keep everyone safe on campus.

She also said other universities have skate paths and it’s possible Otago will follow suit in time.

Interestingly, Andreas said it’s faculty members, rather than Campus Watch, telling him off for skating. He said, “I’ve had staff walk in front of me and make sure I get off before moving”.

Critic also spoke to Owen who said, “I’m bummed about it because skateboarding is my primary mode of transport”. While understanding about the need to avoid collisions in crowds, he is upset about the 24/7 timing of the ban. He said, “I have no problem not skating on the central Uni grounds. However, especially at times when there’s no one around (like during classes or at night) it seems kinda ridiculous to ban wheeled transport.”

Owen said “the Campus Watch dude who told me about the ban was super chill and not a dick so I got no problem doing what they tell me”.

According to Otago Bulletin Board, it seems like Property Services’ focus on getting people to “walk their wheels” was caused by the arrival of Lime scooters in Dunedin. Under the new regulations, offending riders can be punished under the Discipline Statute of 2011. In theory, this probably means a trip to the Proctor’s Office. But it is unclear how exactly Campus Watch are going to deal with fast offenders unless they’re skating themselves or commit to a tackle to the concrete - both of which are probably health and safety risks in and of themselves.