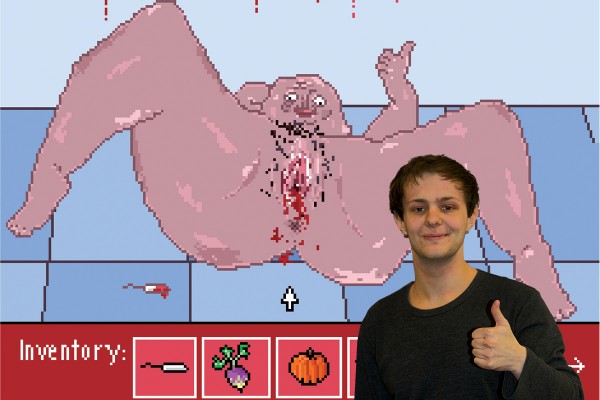 This time last year, Critic made international news. There were Slovak opinion pieces and arguments on French radio. There were stories in Reuters and CNN rung the editor at 2am. That’s right, it’s Issue 12, which makes it the one year anniversary of the Menstruation Issue.

This time last year, on Monday night, a rogue division of Campus Watch decided that the cover of Critic, which featured a cartoon naked person bleeding from the vagina to raise awareness around menstruation, was objectionable. Instead talking to us like a reasonable person might do, they decided to remove copies from stands and destroy them. The University admitted to destroying 500 copies, which is a number they pulled from thin air to sound like fewer than our estimate, which was closer to 2,000 copies.

The University denied that it was censorship, citing that the order to destroy the magazines hadn’t come from higher up in the University, and completely ignoring that apparently the culture of a branch of the University was toxic enough that a decision to break the law apparently wasn’t questioned.

Emails released to Critic under a different Official Information Act show that one Campus Watch Team Leader, the person who apparently ordered the destruction of the magazines, sent an email to the Proctor calling the magazine “trash and filth” and alerting him that they’d destroyed the magazines in stands. They were under the impression, which the University claimed was a misunderstanding, that the University had ordered the destruction. Here’s the rest of their email in full, because it reveals a lot about them.

“While I am aware that people have freedom of choice, as a Campus Watch Member, I feel that we are trying to instil good social values In our students by trying to reduce the drinking culture, helping students to respect one another and to minimise harm to them.

This magazine and it's [sic] drinking and drug promoting culture, definitely seems to undermine the values we are trying to protect.

It was Graduation weekend and with all the students and parents around the Campus for the weekend, I hate to think what sort of culture they think the publishers of Critic are trying to promote by having It so publicly displayed.

My team and I discussed the cover on this latest edition yesterday and we felt strongly enough that we needed to do something about it. I fully endorse what my work colleague has written in the below email.

Fortunately the University Administration acted quickly to withdraw the magazine and we all applaud that action. There were however, many hundreds of copies on public display still on and off Campus tonight which we have removed.

As far as we know this person is still working at Campus Watch and did not face disciplinary action.