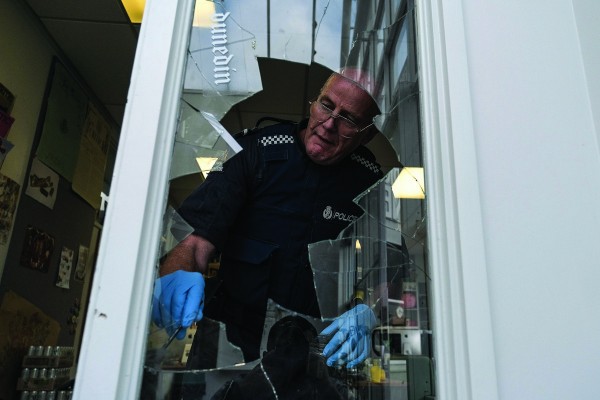 The Critic office has been the target of two break-ins over the past month, with two non-students, reportedly highschoolers with links to youth gang the “Vit-Cs”, facing court action over the second break-in.

At the first break-in, which happened over a month ago, the thieves stole some beers and OVIs from the fridge, as well as a slab of V and a backpack that was leaning against the fridge that had a laptop in it, but ignored everything else, including the computers, the camera gear, and signed life-size cutout of Jacinda Ardern (our most valuable asset).

“I was sad that the OVIs were gone,” said Asia Martusia, Critic Illustrator.

“Yeah, that was shit,” said Saskia Rushton-Green, other Critic Illustrator. “I wanted to drink them.”

Despite an incredibly blurry CCTV image of a man in a white hoodie, the crime went unsolved.

The second break-in was a different story. The thieves must have panicked and run when the alarm sounded, because as far as Critic Editor Charlie O’Mannin (me) is aware, nothing was stolen. The thieves appeared to have left their own items, including a backpack and a cellphone, behind. Critic was not allowed to keep either of these items.

Partly due to clear CCTV footage of the two individuals, one 16-year-old and one 17-year-old were charged in relation to the break-in.

The two individuals are reportedly linked to the “Vit-Cs”, a group of highschoolers so named by the police for buying $1000 worth of orange items on a stolen credit card as part of setting up a new gang.

“Why didn’t the police give us a cool gang name? We should ask,” said Asia.

“Critic will not tolerate this kind of invasion of our turf,” said O’Mannin, bravely, “we’re the only ones who are allowed to commit crimes around here”.

Despite the case appearing in the district court, it was later moved to the youth court, meaning that we can’t publish the excellent courtroom sketch done by our illustrator, or publish any details about their exceptional appearance. We’re not happy about this, but Critic’s list of enemies is long enough without adding the justice department.

The same individual appeared in court later that week on charges of threatening to kill, possession of an imitation firearm, and breaching bail, after brandishing a cap gun in Meridian Mall and threatening to stab a security guard.

Critic is officially declaring war on the Vit-Cs. As soon as we find out where the Vit-Cs’ gang turf is we’ll be invading it and publishing exposes on how they’re wagging PE.