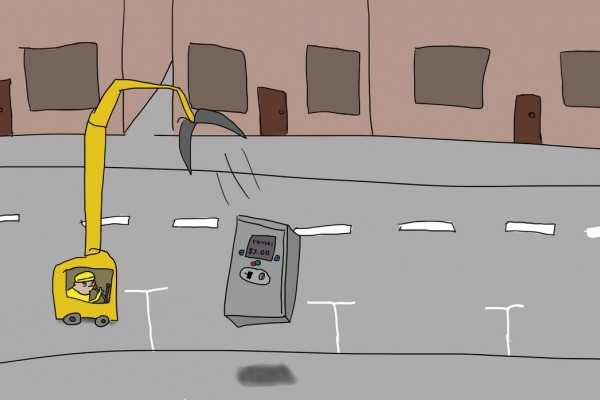 Spoiler alert: it is.

Last week OUSA made a submission to the DCC, calling the proposed Tertiary Precinct and Jetty to Police Street parking changes, which would see paid-meter parking rolled out to more streets in the student area, “an absurdity”, and recommended it be changed to benefit the student population and residents.

OUSA disagreed with the DCC’s statement that students want to park for shorter periods of time. In their submission they wrote that, while many students only have to attend university for lectures, tutorials or labs, many choose to study on campus.

OUSA also disagreed with the DCC’s belief that the proposed changes to the parking system will resolve issues in the Tertiary Precinct. “We do not believe that costed, yet unrestricted parking will reduce the usage demand”, they said. OUSA claimed that demand for free parks will rise as a result of increased numbers of parking meters, as “commuters will take free parks that residents currently use to store their vehicles, forcing residents to pay to park their cars near their own homes – an absurdity.”

In their submission, OUSA said they doubt that any other neighbourhood in Dunedin with such a high concentration of housing would have such parking changes occur, and that while the DCC class the area as ‘Campus’, they said that the tertiary precinct is a student neighbourhood. “Students do not have the fiscal means to do this, these proposed changes will only make students more poor,” said the submission.

The submission also asked the DCC to consider improving the functionality of public transport by providing free Wi-Fi and charging ports, alongside reducing the cost of public transport for students. OUSA stressed the importance of providing an increased number of disabled parking spaces around the tertiary precinct and suggested that the DCC provide “two free residents only car parks to each of the residential homes that will be affected by the proposed parking changes”.

To reiterate the main points of OUSA’s written submission, OUSA Education Officer, Will Dreyer and President James Heath will be following up with oral submissions to the DCC in a few weeks’ time. “Physically speaking to Councilors at oral submissions always helps you get your point across - it also shows you care enough to turn up,” said Will.