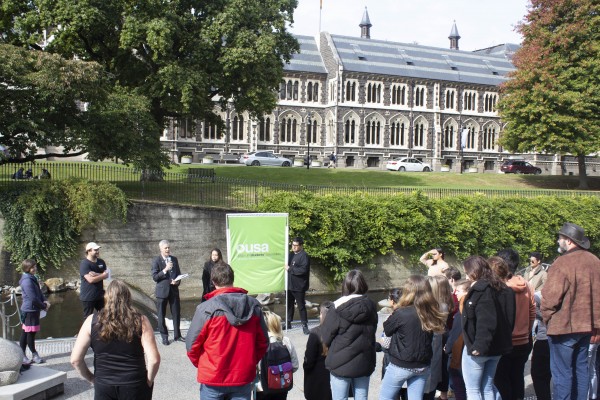 On Thursday, April 11, almost 800 kilometres from Parliament steps, OUSA marched a group of students and staff from the Union Lawn to the Leith steps across from the Clocktower. There, almost fifty people rallied for the return of Student Allowances for postgrads in sync with those who turned up in Wellington to present the 5,000-person-strong petition to the Education Minister, Chris Hipkins.

As the crowd chanted, students told Critic why they were there.

One undergraduate student explained that the lack of financial support was a “barrier” to postgraduate studies. Another, Josh, simply said, “the system is fucked and we’re here to un-fuck it.” Recent graduate, Guy, said that he was rallying not just for the allowance, but to show that students should and can demand more from their Government.

In his speech, Postgraduate Officer Dermot Frengley reminded the crowd that there is no such thing as “postgraduate allowance” - it’s just a student allowance that postgrads don’t get. "The New Zealand First, Labour and Green parties campaigned on returning postgrad allowances, but none have done anything about it.” Green Party co-leader, James Shaw, had even come to Otago ten days prior to the 2017 election to promise that they would restore it.

The list of speakers included three University staff members who work with postgraduates: the Deputy Vice-Chancellor for Research and Enterprise, Richard Blaikie, the Dean of Graduate Research Schools, Rachel Spronken-Smith, and the Graduate Well-being Coach, Nikki Fahey. Each one spoke of the contributions postgrads have made to the community and country, and of the negative impact financial hardship has on productivity and mental health.

Dermot insists “this is an issue where the University and OUSA can stand side by side on. The more awareness about this and the more attention we get from the government helps to bring it into the national spotlight.”