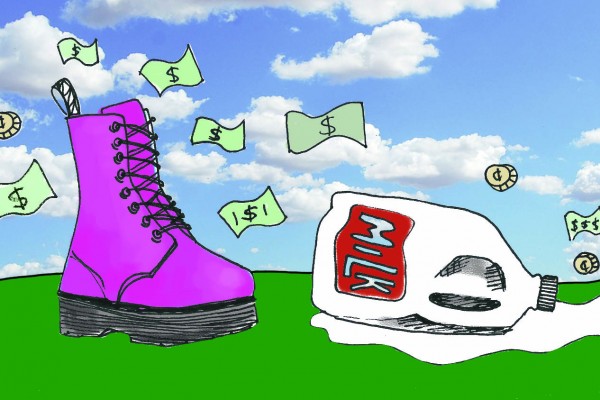 Not included in random shit is Free Food Fridays. Sad.

A tonne of milk in Otago Business School: $5,800 per year

Have you ever walked past a fridge and decided to take a sneak peek inside? That’s what Critic did in-between lectures in the Business School. To this reporter’s shock it was completely packed with upward of a dozen two-litre bottles of milk for just the one floor.

When asked, a University spokesperson revealed that the Otago Business School has an annual budget of $5,800 for milk, serving 145 staff and over 200 students. If we are generous and say 400 people have access to this milk, that’s $14.50 each, or roughly 8 and a half litres of milk retail. That is 283 cups of coffee a year (if the calculation of 30mls per “splash of milk” is correct). Which isn’t actually that crazy, when you think about it.

However, this is presuming no one doing commerce is lactose intolerant. The real scandal is that the milk budget does not include dairy free alternatives, and apparently there has been “no indication” that there is a need for such alternatives. One student Critic spoke to has gone as far as to suggest that this is “vegan erasure.”

Sky Sports in the Main Common Room: $5000 per year

You know the random sports playing in the Main Common Room of the Union Building? We’ve all seen it, but most of us don’t actively watch it. We asked how much the University splash out so that the odd breatha can catch up on the latest NRAFLBA-whatever match.

A University spokesperson said the University pays $5000 every year as a commercial subscriber to Sky. We presume this means they get the full package included. They also added that they are open for requests on what goes on the big screen. Critic is still considering what to do with this mind-blowing piece of information.

It certainly sounds like a shitload of money. But to be honest, this is not outrageous. Campus Watch staff walk at least 20km every shift. Their feet need protection from the best boots the market can buy. No hate here.

Silhouette sticker of the Empire State Building in the Otago Business School LG04 Room: $22 to $92

Most scandalous of all, the Otago Business School spent between $22 and $92 (excluding postage) on a silhouette sticker of the Empire State Building in LG04.

In response to an Official Information Act request from Critic, Claire Gallop, Manager of Policy and Compliance in the Office of the Registrar, said the room is “primarily used by Executive Education, which has a strong international focus”. Apparently the sticker has been there for ten years or so.

For a discipline that prides itself upon empiricism and efficiency, it is surprising that no cost benefit analysis or tender process was undertaken to assess putting up the sticker. The lack of accountability is shocking. If putting silhouette pictures up in classrooms enhances the learning environment, why aren’t there T-Rex cutouts on the walls of the Quad classrooms? This is either a scam, or the Business School’s secret weapon that they are refusing to share with the other Departments. That, and all the milk.