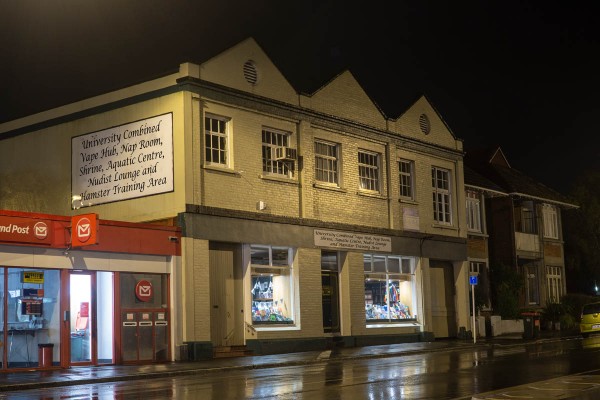 What Should OUSA Use the Second Floor of the University Bookshop For?

Ever wondered what was upstairs from the University Bookshop on Great King Street? Critic can reveal that it is currently a beautiful 500 square metres of untapped potential. We believe that since student fees helped OUSA buy the building a few weeks ago, it should be up to students to decide what goes in that space. Here are some suggestions.

Calling all citizens of Vape Nation. Imagine having a place to come and chill, study, and blow phat clouds with like-minded people; all without pissing off just about everyone else on campus who doesn’t vape. Having a dedicated space would also make it easier to one day declare Vape Nation’s independence from New Zealand.

Nap room with lots of pillows and blankets

There’s nowhere good to nap at Uni. The blue chairs in the Link are covered with hair. The red chairs on the library first floor? Also covered with hair. The bean bags at AskOtago? Fuck AskOtago. The couches at Critic are okay, but apparently they used to be called ‘the sex couches’ which makes a nap on them less appealing. Union Lawn? Too high a chance of seeing naked Josh Smythe with a whip.

With the new UBS space, OUSA can bring comfort back into students’ lives. A room stocked up with blankets, cushions and couches definitely will remain a wholesome nap space and not become Sex Couches 2.0.

Our office is pretty nice. It has a Jacinda Ardern cut-out, a pot plant, and hundreds of issues of Critic dating back to the Middle Ages. We’re not complaining. We’re just saying that all of that can be moved to a bigger office with more Jacinda cut-outs, more pot plants and even more Middle Ages. Please and thank you, OUSA.

Are you sick of going to Pint Night to dance the night away and ending up stuck in the line for ever and ever? No longer. Never-ending dance party space at UBS (if OUSA give it the go-ahead).

We are students. We deserve everything in life to be easy, and given to us for free. Including doughnuts and coffee.

Anyone else seen that Facebook video of a hamster running through different mazes? So cute. So wholesome. Charlie said Critic wasn’t allowed to buy a hamster so Esme could train it to navigate mazes and earn millions going viral on Facebook. Rude. So now she’s appealing to OUSA. Pretty please?

Serious idea: put the Uni merch store there and then return the study space that were stolen replaced from the main library with AskOtago.

As above, fuck AskOtago. Bring back our study spots.

Move the Aquatic Centre there

Having the OUSA Aquatic Centre all the way over by the harbour is not good for those of us looking to meet, date and marry sexy rowers. Bring the rowers back to campus!

Critic may or may not have started a nudist club through this week’s cover shoot. Turns out thirty people who were comfortable getting naked and photographed for a magazine cover that will be seen by thousands of their fellow students have a lot in common. Give them some space to be naked and free more often. Professional nudes not included.

An art installation that’s just We Like To Party! By The VengaBoys on repeat

A shrine to Charlene Chainz

Charlene, oh Charlene, our University is so blessed with your presence. Whether it’s ripping a fat cone or spitting fire, we are honoured to have you as the Worldstarhiphop.com Officer of the OUSA Exec. In honour of your glory, OUSA should dedicate its underutilised room in UBS to you, adorning it with plenty of chains and conspiracy magazines about how Harlene Hayne and Charlene Chainz have never been seen in the same room at the same time.

Turns out there are a lot of cults around campus. We can’t imagine that the very public and many-windowed OUSA Recreation Centre is an ideal place to meet. The second floor of the UBS could help with that. There’s even enough room to install a sacrificial altar.

We only imagine that they practice on the street because these people are displaced. They need to be homed. Herding them into a building will also make sure people off the street can’t hurl abuse at them, either. Win-win.

Imagine a slide from the second floor of UBS to campus. Hands-down would be the quickest way to cross the one-ways.