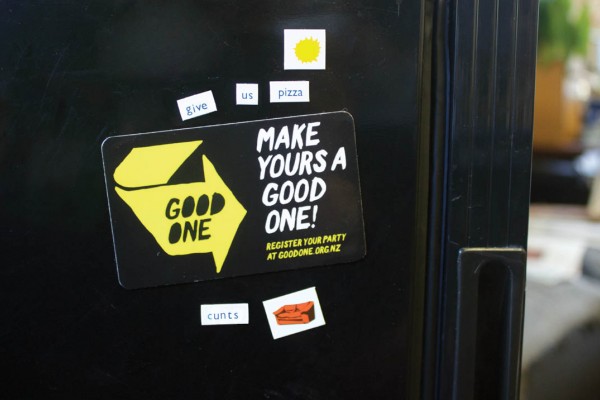 Is Good One a Shit One?

Campus Watch just want to be invited to parties too, guys

Between the sunset of Flo-Week and the dawn of O-Week, a familiar black and yellow poster quietly returned to the OUSA bollards: the “Good One” campaign.

“Good One” is a party register campaign run by a squad of OUSA, the Police, and the Proctor’s Office, and is backed by a number of other community and government organisations. Students sign up on their website by putting in their contact deets, address, and how many people they are expecting to attend. Either the police or Proctor’s office will then give you a ring to coach you through responsible partying, and throughout the night will keep an eye on things in case they get out of hand. It also means if a noise complaint gets made, you get contacted directly about it to turn down the tunes. It was launched at Otago last year to very little fanfare, and appeared to struggle to get registrations from the get-go. There were only four parties registered throughout 2018 Flo and O-Weeks and not much more in the months following.

In an OUSA executive meeting in March this year, OUSA CEO Debbie Downs mentioned that she believed around 100 parties had registered in 2018. OUSA did not respond to Critic’s request to confirm those numbers. Before then, “Good One” had not been mentioned in an executive meeting since March of 2018.

The campaign was first launched in Christchurch in 2014 and started as a student community project. It even won an award in 2017 from the “Police Evidence Based Problem Oriented Policing Awards” for “excellence in reducing harm from crime award”. The award, despite its very long and specific name, generally reflected the success of the Good One system in the Christchurch student community. Over in Christchurch, over 1000 parties were registered in 2018 and Good One was directly linked to a drop in police and noise control callouts.

That’s great for Christchurch, where students are often spread throughout the entire city, unlike the student-crammed slums of Dunedin’s North. However, it is unclear how the campaign has been tailored to the Otago student community, whose relationship to and history with authority has been tumultuous, to say the very least.

Out of the two dozen students Critic spoke to, four had heard of the Good One register before. One student said a major drawback is that parties they host and attend often involve a degree of weed, and they wouldn’t want any police “snooping around”. A trio of lads said that they had tried to register a party last year but that it “didn’t work,” and they had only tried because they thought it made their party exempt from noise control (which is incorrect). One girl, once Critic explained what the register did, said she had heard of “registering your party to the police,” and she and her friends agreed that they would definitely use it for bigger parties that they did not want to get out of hand. One student said that they “definitely could not be convinced” to use the register, as they did not believe that it offered more than what campus watch’s night patrol already did. But his, and the minds of all other unconvinced students Critic spoke to, said that if there was an incentive, they would be more taken by the idea.

OUSA did not respond as to whether they’re considering offering incentives, like pizza, for students to register their parties. However, it is clear that the comfort of knowing that the Police and Campus Watch will have their eye on your party is not enough.