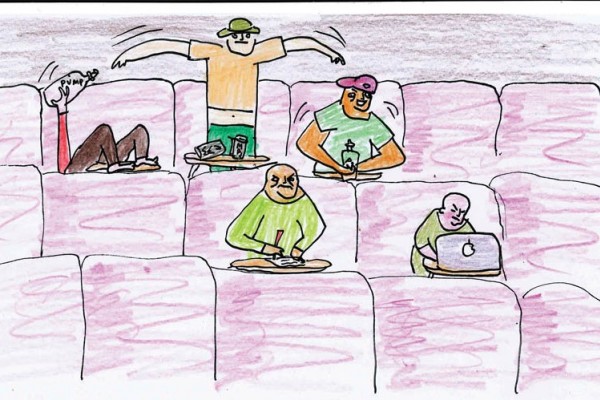 Campus Watch were called to the 4pm LAWS101 lecture three Thursdays ago after a group of inebriated students heckled Professor Ceri Warnock mid-lecture.

The boys were observed sitting at the back of Castle One drinking Billy Mavs and brew-filled Pump bottles and calling out, clapping, and shouting excessively throughout the lecture.

After the first lot of noise, Professor Warnock confronted the hooch-filled hecklers from the front of the theatre, but alas the heckling did not stop.

“After they refused to calm down, I went up to them and told them all to leave,” Professor Warnock told Critic.

The pissed pesterers refused to do so and talked back to the Professor, with one questioning why he had to miss an entire lecture of LAWS101.

Eventually the boozers left and were heard making noise in the hallways and lobbies of Castle lecture theatres. Two of them materialised at the front doors of the theatre and continued to harass Professor Warnock.

She says, “one started arguing with me but he was so drunk he could hardly stand up. At that point I went to call Campus Watch”.

But as Professor Warnock left the lecture theatre to call on Campus Watch, the bulk of the barking tosspots — “ten” boys, as one Laws101 student observed — exited out the back doors, drinks in hand.

Critic understands the self-ejection by the group was met with satisfaction from those LAWS101 students in attendance and that some counter-heckling was offered to them as they left.

Harry, a student who attended the lecture sober, told Critic, “It was slightly amusing but to be honest more embarrassing than anything for them. They just made themselves look like idiots”.

Proctor Dave Scott said the incident “would breach our student Code of Conduct, for which, if the offenders are found to be students, exclusion from the University is a possibility”.

He also stated that the matter was still under investigation and a request for reviewing the CCTV footage has been made.