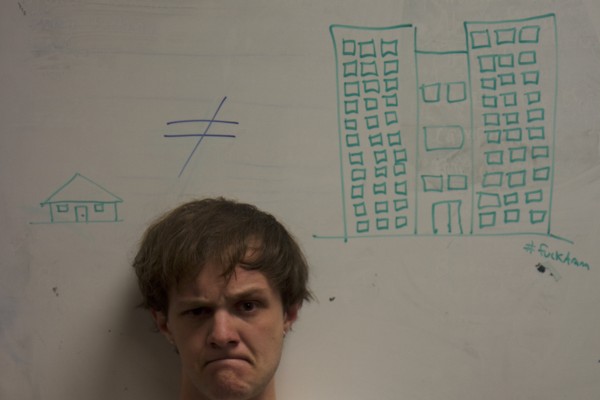 This week we’ve got two stories about areas of tenancy that are technically legal but are still fucked, and in both cases the tenants are the ones who lose out. Erin Gourley looked into tenants being ordered by the Tenancy Tribunal to pay the rent that vanished flatmates have left unpaid, and Nina Minogue and Esme Hall talked to Uni Flats residents who are upset about University of Otago employees coming into their flats without giving them proper notice.

For those of you not in the know, Uni Flats are (generally) owned and/or operated by the Uni, mostly for the benefit of international students. I always assumed that Uni Flats were just like regular flats, except clean.

Landlords must give you at least 24 hours’ notice before they come around as part of the Residential Tenancy Act.

However, the Uni told us that these properties don’t fall under the Residential Tenancy Act, because the University essentially pretends they’re residential colleges, which for some reason operate under completely different rules.

Except that Uni Flats aren’t residential colleges; they’re flats - they’ve literally got the word ‘flats’ in their name. They’re just like any other flat: a bunch of people living together in a house and trying not to annoy each other to the point of murder.

This wouldn’t be that shit if it wasn’t for the fact that residential colleges are EXCLUDED from the Residential Tenancy Act, which means that none of those laws apply to them.

Putting aside the fact that colleges themselves aren’t subject to the Act (which is not cool), that the University can decide that a flat they own is exempt from the Tenancy Act just because they own it is fucked.

I wonder whether the Uni would get away with it if the majority of the Uni Flat residents weren’t international students, who are often less aware of New Zealand tenancy law, and the fact that it’s not being applied to them.