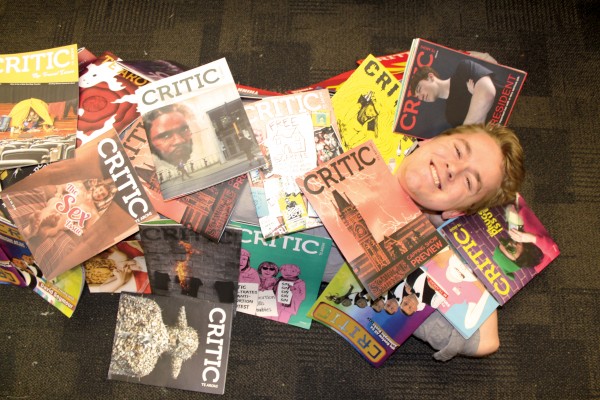 Editorial: The One Where I Get Self-Indulgent

I’m very sad. This is the last issue of Critic for 2018. I will be moving on next year, appointing a new editor, and leaving this beautiful city and all you wonderful people. That makes me sad.

I love this magazine. I really do, despite all the 4am nights and 60+ hour weeks, I love it. Former editors keep telling me it was the best job they ever had, which I think was meant to make me feel good but honestly just makes me very paranoid about how shit the future is going to be.

In this issue, feature writer Callum Doyle dives deep in to the anals [sic] of history, and digs up a bunch of weird stuff that Critic has printed over the years. I think he wrote it especially for me because he knows what a weird nerd I am when it comes to Critic history.

Critic started in 1925 as a replacement for an unsuccessful newsletter called Te Korero. ‘The Critic,’ as it was known then (we dropped the ‘The’ in the 1940s), was initially a journal, similar in size to today’s version. It was soon changed to newspaper format, before becoming a magazine in 2002.

93 years later, it is still going strong, and on behalf of all the writers who have ever written for Critic I would like to say a big fat Fuck You to the two students who wrote these letters to the Editor back in 1925:

“I predict that The Critic will be a miserable failure like Te Korero.”

“Am I expected to believe that The Critic will sprout and flourish in exactly the same ground that the Te Korero withered and died in last year? The Students’ Executive, instead of wasting its money, should bring out a fortnightly, or rather, monthly newssheet of two or three pages containing the doings of our societies and clubs.”

Archibald Campbell, the first Critic Editor, in his first editorial said, “If the infant Critic does not belie its name and lose its birthright, it will suffer no word or deed to go unquestioned within the four walls of Otago University.”

I’d like to think that this year, our team of reporters has lived up to ol’ Archie’s dream. From Art History, to menstruation censorship, to humanities restructures, to support staff cuts, to the proctor stealing bongs and a search for the fucking Loch Ness monster, Critic has been there, annoying the uni and generally being pests.

So long, thank you, I love you.