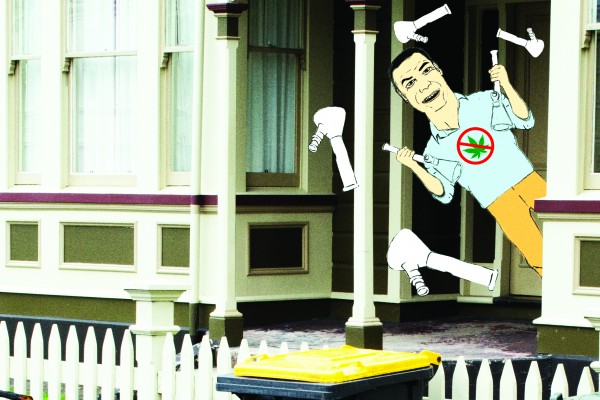 See what we did there?

The story of University Proctor Dave Scott entering student flats and removing bongs without permission has captured the imaginations of the student population and the national media in a way no story has in years, overshadowing even the Critic censorship debacle earlier this year.

It all started last Wednesday, when Josh Smythe put Critic in touch with some students who had had three bongs removed from their Leith St North flat while they were away from the house. Initially they thought they had been robbed, but the Proctor came around the next day and told them he had confiscated them. He told the flatmates he would give them a warning and wouldn’t take it to the police if they cleaned up their yard.

The statement provided to Critic through the uni’s communications (PR) department was “The Proctor is comfortable with the action he has taken in this case. The bongs had been used to smoke cannabis, and were in clear view in a flat with an open sliding door”.

The story came out on Monday 9am, and was also published by the Spinoff. It was quickly picked up by Stuff, Newshub, RNZ and the ODT, as well as the NZ Herald, which republished the ODT stories.

That day, Critic was contacted by another student who had a near-identical story. Their Castle Street flat had all been away when the Proctor (or someone from his office) stopped by, entered their flat, took two bongs, and later called them into a meeting where they were questioned on why they had them. That story went online at 3:30pm Tuesday, and again was also published by the Spinoff. Uni Comms didn’t respond to Critic’s request for comment because there was “lots on today”.

At 5:45 that evening the Uni put out a statement to media (though they didn’t include Critic), reiterating that the bongs from the initial story were for “illegal drug use” and that the Proctor was “focussed on helping students gain degrees and not criminal convictions". There was no apology or admission of wrongdoing.

That night, a third student got in touch. Back in 2016, his flat on the corner of Dundas and Castle had also had their bongs confiscated by the Proctor. Unlike the first two instances, the flatmates had been home, but they were in the back lounge and the Proctor had let himself in the front door and down a long hallway. They were also given a warning and made to hand over their bongs, even though three of them were not students. Uni comms did not respond to Critic’s request for comment on that story, which went live at 8:30am on Tuesday.

On Tuesday morning RNZ and Newstalk ZB both interviewed OUSA Re-Creation Officer Josh Smythe, as well as legal experts, to discuss the issue. It was well and truly a media storm.

Abe Gray, cannabis activist and founder of the Whakamana Cannabis museum, called on Tuesday and said he had received a $25,000 from an anonymous kiwi millionaire. He claimed it would be for a ‘Whakamana Legal Fighting Fund’ to bring a private prosecution against Dave Scott and/or Harlene Hayne and/or the Uni as a whole.

Law Professor Andrew Geddis wrote an opinion piece on the Spinoff titled “Hey, proctor, leave our bongs alone: How Otago’s ‘campus cop’ is breaking the law”. Seven Sharp showed up on campus, as well as RNZ, Newshub, and the local media.

Uni Comms was still scrambling, and wrote a draft of a statement in which they kind of partially admitted wrongdoing but backed off from a full apology. It said the Proctor was “for the most part comfortable with the action he took,” but that entering the flat was “technically incorrect”. Uni Comms then accidentally sent that, plus a bunch of internal emails, to the media. RNZ published them and Uni Comms got very angry at RNZ.

A press conference with the Proctor was called for 3pm, and was attended by Critic, Stuff, the ODT, RNZ, Channel 39, Newshub, and Seven Sharp (who also got a sit-down interview with the Proctor that everyone else was very jealous of). Dave Scott said that “with the benefit of hindsight I can see that my actions were wrong” and said that he had offered a personal apology to a member of the Leith Street North flat.

The livestreamed press conference was pretty much required viewing for students around the city. Critic had 600 viewers who watched the entire 20 minute press conference live, plus probably way more students who watched with the RNZ or Stuff livestream, which admittedly were way better than Critic’s because they have advanced technology such as ‘microphones’ and ‘proper cameras that aren’t just a phone on a desk’.

That was basically the end of the news cycle… but then the protest took over.