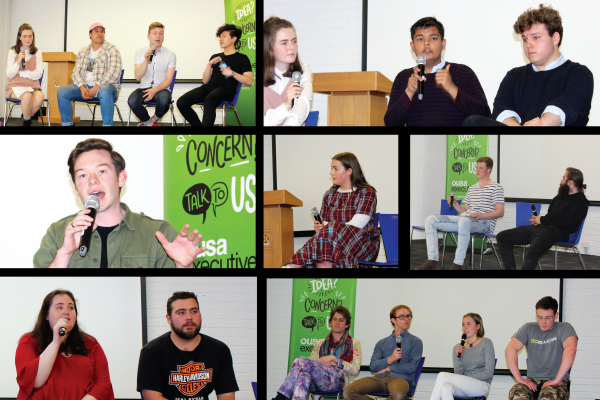 Norhan didn’t show up because she hadn’t finished her family file, so this was just a weird one-on-one interview.

Bonnie has a very good speaking voice. She thinks the finance officer doesn’t need that much financial expertise, because OUSA already has in-house accountants, which is fair to be honest. Instead, they need to be “decisive and firm and have a clear vision”.

She was strongly in favour of communicating the things that OUSA have been doing to students, praising the exec roundup videos as a good start, “And we can do more”. Including talking to the media. Critic is strongly in support of this (see page 9).

She said repealing VSM was the reason she ran. She repeatedly referred to herself as “loud,” and used the term “real change” a lot, despite the connotations of the disastrous Real Change ticket from 2016. She concluded by saying, “I’m loud, I’m proud, and I won’t shut up”.

Our Winner: I mean, there was only one person there. Bonnie wins by default. Although Esme Hall did do a pretty great job as moderator; she wins our runner-up award.

Everyone in this debate were massive nerds. They used the words “transparency,” “consultancy” and “committee” a lot.

Andre wants wifi in every lecture and for the exam timetable to come out earlier. Will wants podcasts for every paper. Raf wants transparency and consultation.

Andre and Will hit out at each other over whether or not protests work. Will claimed credit for organising the censorship protest earlier this year, which he said “shows I can get it done”.

Andre said, “As much as a protest sounds great, the way to take the fight to them is by sitting on committees,” and pointed out that he currently sits on the Education Committee and is already pushing for change through that committee.

Raf pushed for more “intellectual diversity” in the university and for more cross-crediting of papers.

Andre thought the most important issue was getting more internal exams so that courseload can be spread throughout the year. Will opted for podcasting lectures, and Raf reckoned that students being more aware of their rights was the most important.

There wasn’t really any argument or disagreement in the Welfare debate. Everyone that runs for Welfare is just super nice all the time so nothing interesting ever happens. These two are apparently even campaigning together, which makes absolutely no sense. They said that regardless of who wins, they would both want the other to be on their committee, which was almost sickly sweet.

They both agreed that mental health is the most important welfare issue facing students.

The most interesting part of the debate was when Andrew spoke about being a drug addict for many years and how that shaped his understanding of struggle. “It makes you understand how you’re looked down upon by society; the trouble that you have accessing services.”

Our Winner: No winner. There can’t be a winner if you’re on the same side. What even is this election?

Roger talked very loudly and very quickly. He said his top achievement on the exec this year was making exec roundup videos.

All of the candidates are experienced. Pou’s been on the Te Roopū Māori exec twice, once as the Tumuaki Tuarua, the equivalent of the OUSA Vice-President, Roger is the current OUSA Campaigns Officer, and Matthew is heavily involved with clubs, including Students for Environmental Action.

When asked what set them apart from their contenders, Pou emphasised his Māoritanga and different cultural perspective, Matt pointed to his “boots on the ground experience” in activism, and Roger said the word “continuity” again. You can’t say he doesn’t practise what he preaches.

When asked who would be their second choice after themselves, Roger said Pou and Pou said Roger and Matt wouldn’t answer the question.

Our winner: Pou. Roger was an engaging speaker, but failed to break through because, like Matt, he spent too much time focused on internal intricate OUSA details. Pou had a better focus on outward-facing issues that actually affect students, and clearly connected more with the audience (although they were mostly his mates).

Both Jesse and Findlay are RAs and, predictably, want RAs to get paid more. “We’ve got a tough job and deserve to be paid right,” said Jesse. Findlay said that most RAs “have to get a second job to pay to go to college as well as live there,” and called the situation “Incredibly unfair”.

In non-RA related policy, Jesse wants to campaign against sexual violence around campus. He wants to push to “change the dialogue we have at this University around consent. People do stupid shit, they get on the piss, and they let themselves down, they let their community down, and quite frankly it’s not good enough”. He acknowledges that there are already consent workshops in the Colleges but wants to also look at workshops that address what consent looks like in the “real world”.

Findlay reckoned it was more important that OUSA push to convince halls to allow third-party experts to run programs instead, as he didn’t trust the halls to run adequate workshops, saying “Halls approach everything as an insular problem, but the support is inadequate”.

It’s sometimes hard for Colleges Officers to get into Colleges to connect with the freshers. Jesse wants to exploit his ins with RAs to sneak into the Colleges and secretly spread the word of OUSA. Findlay blamed the poor relationship between OUSA and the Colleges on some previous Colleges officers who he described as being “really really crap”. He said that he’s going to fix this by trying really hard to get the Colleges to respect him. Critic wishes him luck and are generally in favour of sneaking around as it seems more fun.

When asked what made the candidates different from each other Findlay said “What, why I’m different from the other two white guys sitting up here? No, no real difference I don’t think”.

Our Winner: Pretty close, but Findlay pipped it. Jesse and Findlay were both solid, but Findlay seemed more prepared and showed a more in-depth understanding of the role and the issues at play.

Either they all had the same idea or everyone just copied Sam because he spoke first; they all seemed to want to get rid of single-use plastic in the uni. Georgia said she already lives without single-use plastic, which Critic, who today complained that eating slushy cups with normal spoons instead of disposable plastic ones made them “taste of metal,” considers showing-off.

Adam wants OUSA to appoint a Sustainability officer, which seems like another poorly defined position where it’s hard to tell if people are doing meaningful work *COUGHFinanceRecreactionCollegesCampaignsCOUGH*

The debate came alive when Adam and Sam started going at each other about the DCC. Adam wants OUSA to make more submissions to DCC policy, while Sam wants the DCC to “withdraw their fingers [Critic became slightly aroused]. They’re totally opposed to students and trying to please their old mates and regulate everything. They’re waging a full-scale war on fun”.

Adam hit back, saying that more DCC regulation would mean better flats. Sam repeated that the DCC should “withdraw their tendrils” at which point Critic left and masturbated in a nearby bathroom stall.

Henri seems like he really wanted to run for Recreation but didn’t want to run against Josh. He wants to run wellness campaigns to help people’s health and flatting campaigns to ensure that rents wouldn’t increase as a result of higher student numbers. He also said he wants to “take some of the burden off” the Welfare Officer. Seeing as Campaigns is a bullshit role that shouldn’t exist and Welfare is notoriously hard, this doesn’t seem like a bad idea.

The candidates sparked up when talking about repealing VSM (Voluntary Student Membership for those of us not too deep into student politics to ever claw their way out). Adam said it was “shackling us,” Henri said he would “relish the opportunity to fight,” and Sam said that it was “good in theory, but has worked awfully” because the uni has too much control over OUSA. Georgia said she didn’t know what it was, but suddenly ‘remembered’ and said she was “against anything compulsory”. Good save, Georgia, good save.

Our Winner: Sam, with Adam a close second. While his ideology seems all over the place, Sam gets credit for being outspoken and opinionated about a lot of things and for saying more than generic platitudes.

This was basically a contest of who can have the most fun. Carl is in the Hunting and Spearfishing club, the Tramping Club and the Rock Climbing Club. Josh is the incumbent Recreation Officer, was the President of the Fire and Circus club, and is an “elite level partier,” who “gets amongst Pint Night, Castle, and Hyde”.

Carl wants to see clubs do more community outreach, things like beach cleanups, to improve how the community views students. Ok? Seems like an odd thing to prioritise.

Josh admitted that the Recreation Officer doesn’t really have to do much, “The clubs are really good at managing themselves” and said that he sees the job as providing “interclub co-ordination”.

Our Winner: Josh, I guess? It’s hard to pick a winner here because Recreation is basically a pointless position that does nothing. But Josh was funnier.

This debate was boring and Joel nearly fell asleep. Claire wants to see a push for more integration of international students into Dunners culture, and help them through struggles like finding flats and affording food. Sabrina wanted to be more focused on breaking the stigma of mental health for people coming from countries that might not acknowledge mental health issues.

They’re both experienced candidates and both seem like they’d be fine for the job.

Claire claimed she had more policy experience and would be the “advocate and activism candidate”. Sabrina said she had more experience running events, which to be fair is a large part of the International Officer’s role.

Our winner: Draw/Don’t Mind. Both of them spoke fine, and there wasn’t enough genuine disagreement for either of them to come out on top. The Union Grill smells real good from here.

Easily the best debate of the day. Sinead pushed her activism experience in pushing for meetings with the Humanities Vice-Chancellor and organising the student forum on Student Health changes. Dermott admitted he didn’t have the same experience, but said he’s “been here for five years, I’ve seen it in real life. I care about these things”.

Dermott wants to run more professional development events, Sinead hit back saying that wasn’t the job of the Postgrad Officer. Dermott backpedalled and said he wanted to “facilitate them,” not run them. Any time you resort to using the word “facilitate,” it means you’re not doing too well.

Sinead hit Dermott’s lack of experience, pointing out that the University Senate, which the Postgrad Officer sits on, is making the decision in just two weeks on the future of the Art History programme, saying, “We need someone that’s ready to fight now”. Dermott insisted he was ready, despite not having Sinead’s experience.

On the topic of bad postgrad supervisors, Sinead said OUSA needed to step up and be a mediator to ensure departments are getting the right people. Dermott wanted to do a big review where OUSA talks to as many postgrads as possible.

Sinead insisted that, even if she lost, she would still be “a thorn in OUSA’s side, [and] their keenest advocate. If Dermott get it, I will still be here; I don’t think he will”. Dermott responded, “you don’t need a license to care”.

Our Winner: Sinead. Dermott put up a good performance, but was basically overwhelmed because Sinead is a super freak that knows everything about postgrad issues and has basically appointed herself as an unelected exec member and does more work than half of them anyway.