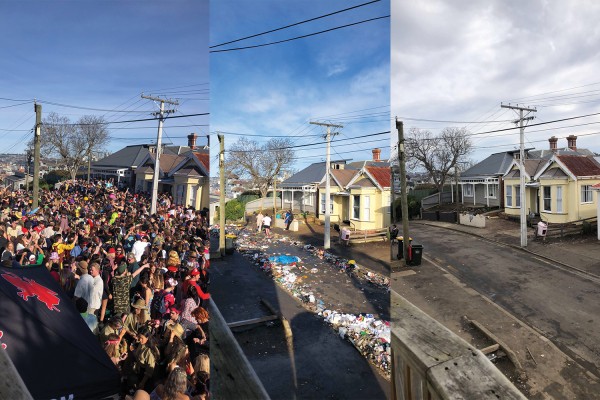 Is Agnew The New Hyde? Not Yet, But It Was Still Pretty Sweet

Students cockblock ODT whinging by actually cleaning up after themselves

The Agnew Street party has left its mark on North Dunedin. The self-proclaimed “Hyde’s ugly stepsister,” Angew is the younger generation’s un-ticketed paradise of day-drinking, bass thumping, and regrettable hookups.

First and second years travelled across campus, and up a hill to meet an absolutely packed street, already plastered with abandoned cans and puke. It was described as “an absolute ripper, aye” by one particularly hungover student. It was a stunner of a day, with toasty 12 degree weather, and the sun on full blast. People flooded in from around 9:30, with numbers peaking around 2.

There were eight arrests at the party, all males between 18 and 23, six of them for disorderly behaviour, one for assault and one for cannabis possession. The red frogs were onsite, providing water and sausages for the intoxicated masses; fed drunk people are happy drunk people.

Agnew provides a street party opportunity outside O-Week for freshers and all the people that didn’t manage to get a ticket for Hyde. The costumes, ranging from “David Bain sweaters” to “Stoners and Post Maloners,” were definitely a highlight of the day, and scarfies love an opportunity to dress up.

While the party made a mess, the residents did a pretty good job of cleaning up afterwards. Yeah nah, good shit team.