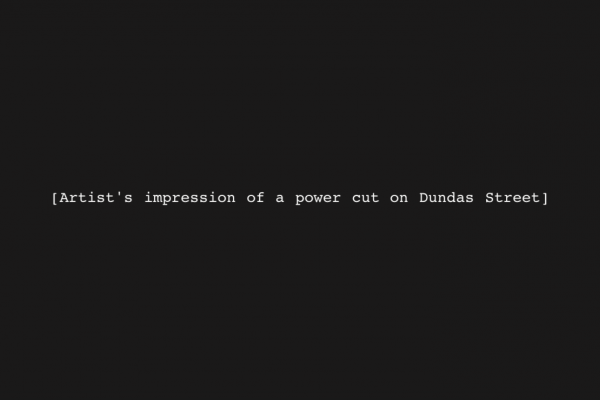 Power Use Overloads Infrastructure During Free Hour of Power

Power cuts better or worse than paper cuts? Not sure.

Students have been left “frustrated” after repeated power cuts in the student quarter due to system overloads during Electric Kiwi’s Hour of Power.

For the first few weeks of semester two, power use has been so high during the Hour of Power that Dundas Street, as well as parts of Harbour Terrace and Forth Street, have been experiencing regular power cuts, with one resident, Mhairi Mackenzie, reporting six power cuts over a two week period which often lasted for more than an hour.

The cuts come between 9-10pm, when most residents have their daily free Hour of Power. Mhairi said the worst part for her flat was missing out on a large chunk of their Hour of Power, “which is gutting”.

Aurora, the company that maintains Dunedin’s electricity lines, told her that the transformer which deals with all the electricity in the area cuts out because there’s a massive influx of power between 9-10, when everyone uses the free Hour of Power.

Mhairi said she’d been in contact with both Electric Kiwi and Aurora to fix the problem, but so far had found their responses “frustrating,” with no idea as to when the problem might be fixed.

“It’s really frustrating because we kind of expect it to happen now, during our free Hour of Power.”

Luke Blincoe, Chief Executive of Electric Kiwi, told Critic that they are working with Aurora, the company that maintains Dunedin’s electricity lines, to fix the problem and that Electric Kiwi “take the issues that some [students] have been having very seriously”.

“So far Aurora have been working proactively to spread load across the phases, and we had hoped that this would resolve the situation. While things have improved Aurora are still looking at what next steps they can take to completely fix the issue.”

“Frankly any solution that says students should not be able to adequately heat their houses won’t cut the mustard from our perspective”.

“It hasn’t caught me in the shower yet, which is good. I was trying to make pumpkin soup one night and the oven went out and there goes our dinner.”