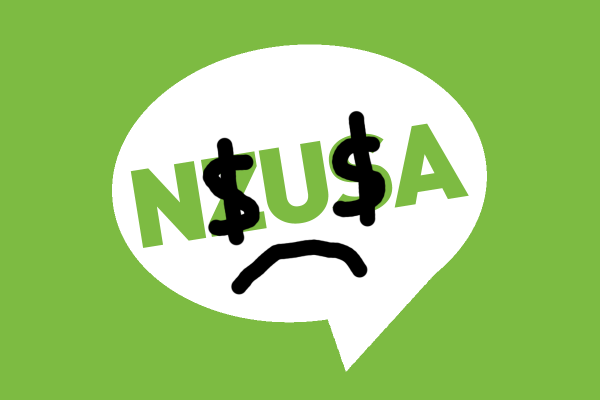 “Daddy will pay for it”

In the latest instalment of the New Zealand Union of Students’ Association's dire financial situation, the association has started asking alumni for donations.

NZUSA President Jonathan Gee said in an email requesting money that the organisation is at a “financial and political cross-road” and needs to ask for help.

“We haven’t taken this decision lightly, but we feel we have no choice because without this support there is a risk that students around New Zealand could be silenced in the national political debate.”

NZUSA has many eminent alumni around the country including Labour MPs Grant Robertson and Andrew Little and Wellington City Councillor Fleur Fitzimons.

2003 NZUSA co-president Rosalind Connelly told Salient Magazine that she wouldn’t necessarily donate: “I do love NZUSA, and I think it’s a critical advocacy vehicle for students, [but] asking alumni for donations is a stop-gap measure at best”. Instead, she said she would like to see NZUSA move towards a sustainable financial model.

NZUSA finances have been precarious since the resignation of Executive Director of NZUSA Alistair Shaw in early 2018, after which significant amounts of leave entitlements needed to be paid. Caitlin Barlow-Groome, OUSA President and NZUSA Finance Chair, said this “was not foreseen when creating the budget last year”.

In May, NZUSA had to ask its member associations to pay over $100,000 of their membership levies for 2019 in advance to keep the association running.

After an emergency meeting the OUSA exec voted to immediately pay NZUSA $22,750, an advance of half of OUSA’s levy for 2019. The other six student associations that are part of NZUSA also voted to pay their levies in advance.

Caitlin Barlow-Groome also confirmed that NZUSA is “looking into” liquidating their assets, which includes their central Wellington office.