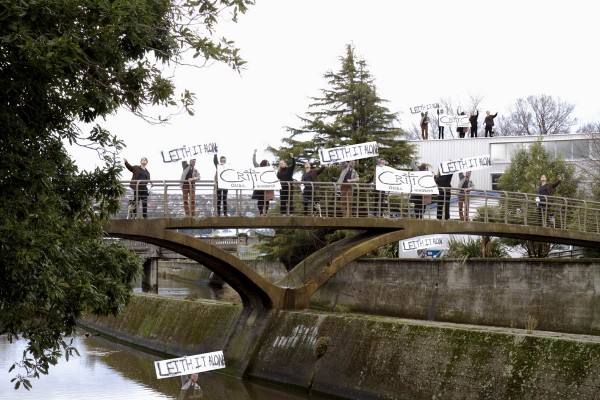 Sold Down the River

Do you beLeith in life after love?

As the clock tolled 1pm, the winds were quiescent across the soon-to-be tainted Leith river.

Several hundred* protesters craned their necks as Charlie O’Mannin, a self-professed “Beleither” and part-time activist, took his place on the centre of the creeping iron bridge. Wearing a t-shirt emblazoned with “Leith, Laugh, Love,” he cast an impressive shadow.

A hush descended upon the crowd as Charlie’s words began to flow, like a river, with quiet conviction. As his words coated the crowd, frenzy began. Signs were rustled. Cheers of “LEITH IT ALONE” began to arise from the masses.

As the speech ensued, it dawned me that I had, in fact, heard these words before. It was the infamous William Wallace speech from 1995’s hit film Braveheart. Nonetheless, the words were fitting and inspiring. With no naysayers, police, Campus Watch or tear gas in sight, we truly were free for a moment in time.

Protester Tess Jhompson was captivated by O’Mannin’s circus. “It’s time to radicalize,” she said enthusiastically, handing out flyers to passers-by. “The protest manager was a really passionate person who had done his research – it was convincing.” Gazing solemnly into the distance, a faraway look came into her eyes. “I was ready to throw myself in the Leith. I was ready to die.” No stranger to democracy in action, Tess has thrown her voice behind many causes, but “this was the most stirring, the most just, and the most peaceful.”

Next to her a young man, Alan McGirdy, jostled for space in the busy crowd. “WE LIKE THE LICHEN!” he shouted hoarsely, his voice ragged from the eternal fight. When asked about his involvement in the movement, Alan replied, “It’s the Leith! We love the Leith”. He found Charlie’s speech to be “inspiring, heartfelt, and nostalgic”.

With a silent prayer for the Leith’s historic art and destiny, the throngs began to meander apart, a braided river system flowing back through the campus.

For a second there, I really thought I was in late-13th-century Scotland. I thoughtfully trudged to the dumpling truck, feeling quietly confident that this show of flagrant democracy would be heard and echo for years to come. The dumplings tasted good. They tasted earned.

*Actual figures may be exaggerated by several hundred people.