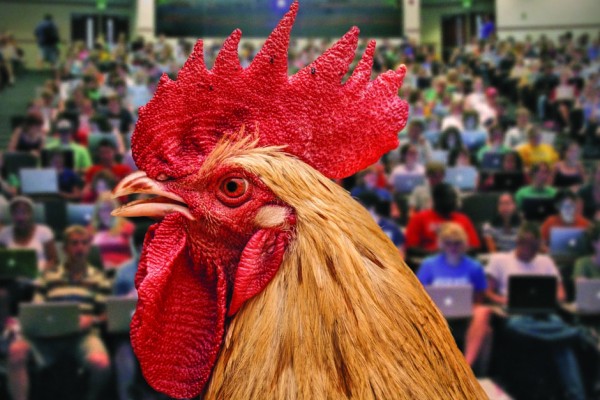 Plz hire us ODT, we can do puns and make nonsensical sentences too

The Friday before last, a naked man wearing a mask ran into Castle 1 during a first year health sci lecture and threw a live rooster into the seats before running out.

The lecturer tried to remove the rooster, but according to one student, the rooster “wasn’t having any of it so she just left it there and continued with the lecture”.

“Mostly I just felt bad for the rooster; it was terrified and it shat all over the seat.”

Another student, who was watching the live stream from a different lecture theatre, gave us a more descriptive account of the situation “‘Hen!! Hen!!’ screamed our lecturer. ‘Everybody stay calm, sorry St Dav’s, there’s a chicken in our lecture theatre!!’” Apparently the person videoing the lecture was panning in and out and following the rooster to capture the action, even while the lecturer was attempting to continue with her slides.

The lecturer eventually called Campus Watch, who chased the rooster down in a ferocious display of dominance and removed it from the lecture theatre.

A University spokesperson told Critic that Campus Watch “Initially placed it [the rooster] in a cardboard box. A safe permanent home was found for it via a staff member later that day.”

When we asked the University if they condone the throwing of live animals into busy lectures they told us to “please refer to the Code of Conduct”.

The naked man has not yet been caught, but the Proctor’s office is “working on it”.

Critic is currently working hard to get to the man before Campus Watch do. If you have any information about the cock with a cock and his cock out please email news@critic.co.nz.