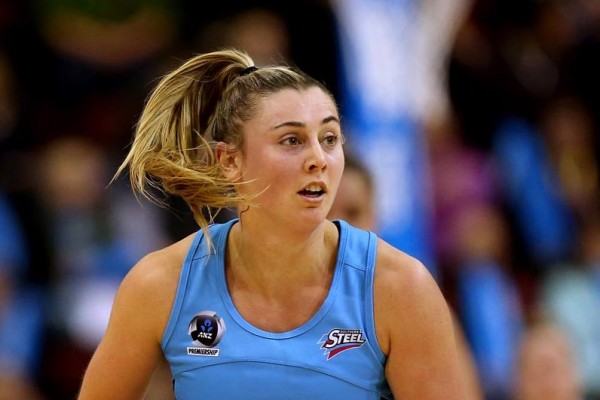 Southern Steel Wing Attack/Centre Gina Crampton came to Dunedin to study P.E. in 2010 and made her way into the Southern Steel as a replacement player in 2012.

Crampton set herself apart with her speed, drive off the line, and feeding ability to solidify her position in the Steel’s starting lineup. In 2016 she made her Silver Ferns debut against Australia and also picked up the NZ ANZ Championship Player of the Year.

Charlie Hantler caught up with her to talk netball, teammates, and Kendrick Lamar.

After winning the NZ ANZ Championship Player of the Year in 2016, how do you feel about your chances of regaining that title in 2018?

Haha – I would love to have that title again. That was a huge surprise and very awesome. But I am more concentrated on our efforts as a team at the moment and getting as many wins as we can.

I’ve noticed that a huge aspect of the Steel’s game is that you seem to pull away in the final quarter with superior fitness. What would you put this fitness down to?

It's taken a long time for the Steel to be able to do that. It used to be the other way round for us; we would fall short in the last few minutes. It is great that that’s now a strength of ours and by golly it comes in handy! We do have good physical fitness, but I think more importantly we now know how to handle pressure and stay calm in critical moments.

If you could choose any sportsperson from history to join the Southern Steel, who would it be and why would it be Marty Banks?

Haha – oh my. Marty Banks... I have seen him training and can tell you he would not be a good netballer. Too weak and lanky, he needs more muscle to try and ball with us!

Which Southern Steel member has the most impressive hidden talent?

Te Huinga (Reo Selby-Rickit) – or 'Hoochie' as we like to call her, is a low-key nerd. She knows the weirdest facts and general knowledge, someone you definitely want on your pub quiz team!

Who’s the DJ on game day and what are some popular tunes?

Unfortunately, I end up with music duties in the changing room. I think it's purely because no one else wants the responsibility of it. Also – I always have data and some of our girls are poor students and wouldn't be able to cater to all requests like I can haha. Sandstorm, by Darude, is obviously my go-to.

Who’s the most untidy?

Wendy (Frew) probably – our captain. She would hate this but it's definitely her, no doubt about it. She likes to bake cookies to keep people on side so she gets a bit of stick for that.

Have you had any offers from other teams during your time with the Southern Steel, and if so why have you turned them down?

I have had a little interest from other teams – not much, to be fair. It's going to be pretty hard to leave the Southern Steel, when or if it happens. We have created the best culture down here and I think that's why the results are coming a lot more than they used to. I play with some of my best mates and that's something pretty hard to beat.

I’d personally attribute the recent downturn in the Silver Ferns’ performance to three factors – the coaching, the players and the loss of experience in the likes of Irene van Dyk and Laura Langman. What role would you say that each of these have to play, and what changes do you feel have to be made in order to get back on top of the world?

Uh, the Silver Ferns. It's a hot topic that's for sure. When I was in there I guess the most noticeable thing for me was the difference in cultures compared to what we have at the Steel. Not everyone is equal and able to be heard in the Ferns environment and I think that is a major problem to start off with. There are a lot of issues that need to be sorted for them to be back to title contenders, but I believe it is definitely still possible. Put the right people in there who are willing to work hard and work for each other and things will change!

The abbreviated forms of a lot of popular NZ sports are starting to threaten the fuller-length versions – sevens with rugby union and T20 with cricket being prominent examples. How do you view Fast Five netball, and do you think it will continue the trend?

Yeah, I've experienced Fast5 netball and it’s super fun! It’s an awesome weekend and they run the event very well. The thing is, you need someone who can slot those 2 and 3-point shots otherwise it gets a bit lacklustre. I like the way it is now – having it as a feature tournament but still focusing on the 7-a-side as the main course.

A key aspect of sports is being able to push through to the finish line, showing fast reactions throughout, so I like to finish my interviews with some quick-fire questions:

WA definitely – centre involves too much running for me haha.

None. Not a hot drink person!

Oooh tough one... I’ve been to Ed and going to Kendrick sooo TBC.