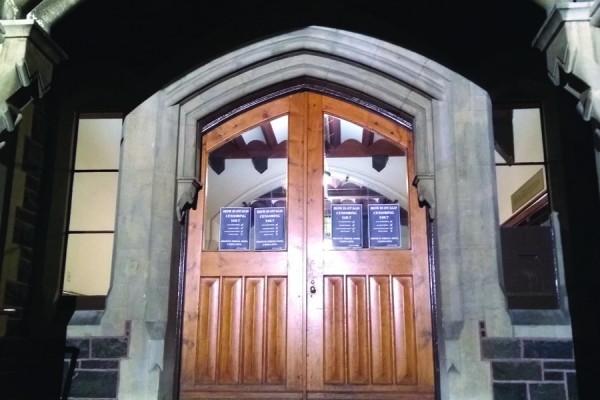 Immediately after the University admitted to destroying copies of Critic’s Menstruation Issue on Tuesday night, students converged on campus and started planning action.

Organiser Matthew Schep said that one of the first things they did was print out posters of the offending cover and put them around the university. “Nothing was illegal but we did place posters outside the Uni’s approved notice-boards.” Organiser Laura Cairns said the group have also done flyer drops and are organising a protest march for Friday. Critic would like to point out that this is after we went to print so we couldn’t cover it; this was not very considerate of them.

Campus Watch were closely following the protesters and taking down posters, including a black and white censored version. Protesters said Campus Watch were circling them while they were planning in the Link. Organiser Laura Anderson said “two Campus Watch employees were pacing and looking to see if there were any posters up. It was intimidation.”

Matthew said “we’d like to know what training Campus Watch goes through and what powers they think they have. It seems they’re taking on a duty to police the University’s brand.”
Laura said “even after the statement came out that it was a miscommunication mistake, Campus Watch was still taking down our posters of the cover.” Another Campus Watch employee told Laura, “Harlene Hayne found it disgusting.”

Harlene Hayne has publicly stated that she did not find it disgusting. “Personally, I felt the content was excellent.  I shared it with my family on Monday night and emailed the Editor of Critic on Tuesday morning telling him I thought it was a particularly good edition.  I am pleased to see that access to the online edition has been substantially higher than normal. “

As far as Critic is aware, removing posters from campus is not part of Campus Watch’s job description. This would usually fall to Property Services.

Although the posters weren’t put up by Critic staff, one Lecture Theatre Technician let Critic know that they had removed some posters from unauthorised locations, but left them up on noticeboards where they were allowed. They said we could pick the posters up again from their offices if we wanted.

The student outrage has coalesced into the group Student Voice. Laura said “we’ve moved from just being angry about Critic to calling out a systemic problem. What happened to Critic is a blatant, obvious example of silencing, but this kind of silencing of student voice is constantly happening.”

Laura Anderson said “we have talked to so many people who haven’t said a political word in their entire life, couldn’t give a shit about OUSA or student politics and have still been like, ‘that’s so fucked up, I’m angry about it and I will come to a protest if you make one’.”
The OUSA Exec unanimously passed a motion to support the student protests. Te Roopu Maori also voted in support.

During the meeting Welfare Officer Abigail Clarke expressed concerns that “protesting and yelling and screaming makes the University listen less,” and International Officer Umi Asaka suggested that sit-down meetings could be more productive.

Campaigns Officer Roger Yan said he couldn’t wait to get banners out. “I think it could be fun.”