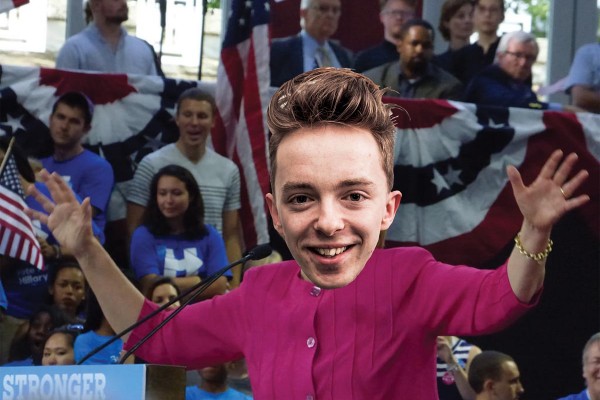 The only other candidate is current NZUSA Women’s Rights Officer Nikita Skipper, from Massey University.

The election is set for May 25th at 2pm, but OUSA is yet to formally acknowledge its existence. Nothing about it appears on any official meeting minutes or documents, raising serious questions about transparency. Nominations closed on Friday 11 May, but there was no open call for candidates. When Critic asked, OUSA wouldn’t even confirm that an election was happening, let alone provide any information about it. Seven of the ten exec members ran as part of the UNITY ticket, which Finn Shewell founded.

Finn is a Very Busy Person™. He has spent two years on the Unicrew Exec, was an RA at Aquinas, an Ignite consultant, a coach on the Aspire programme and was part of the Student Society of Entrepreneurs. He’s also launched the website finnshewell.com. That’s all we’ll say.

Finn sees the role as a platform to advocate for change on issues students care about. He’s “keen to jump into” the operational role to “[build] a foundation that can serve student activists for years to come” in “[campaigning] for all our needs” as students.

“NZUSA is in the perfect position to ... lobby the government to repeal VSM, to encourage better dialogue with University administration, and to explore better organisational structures for every member association. That's where I'm hoping to make a difference as VP - by building a foundation that can serve student activists for years to come.”

Nikita Skipper is from Massey University. She’s worked as interim National Co-ordinator for the sexual violence awareness campaign Thursdays in Black. She says her work at NZUSA “has really helped me to plant my feet in this crazy society we live in” and “made me aware of what I stand for.”