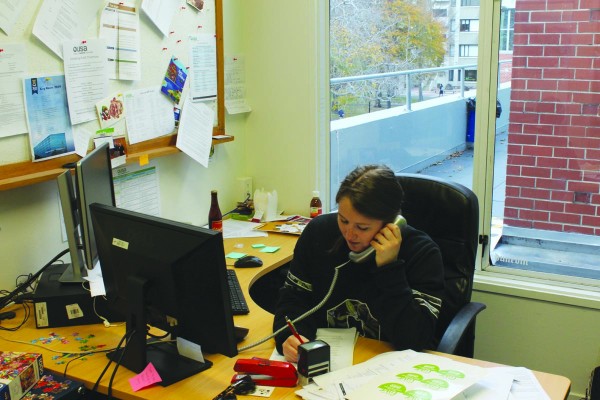 OUSA President Apologises for Being too “Passionate” Attacking DCC

Exec split over how shit DCC is

OUSA President Caitlin Barlow-Groome has walked back her comments criticising the Dunedin City Council (DCC) for not caring about students after she received significant blowback from both the DCC and others within OUSA.

In her President’s column two weeks ago, titled “The DCC Don't Give a Flying Fuck About Students,” Caitlin Barlow-Groome, OUSA President attacked the DCC for not “car[ing] about anyone between the ages of 18-24”.

Caitlin said that at a recent meeting with Dunedin Mayor Dave Cull, “When I asked if he thought it was important that a student rep sit in on the regular meeting between the DCC and the University, he politely laughed and said ‘no, that wouldn’t be appropriate unless you want to end up with a bill’. One of his people in the room said they would ‘consult us on issues that affect students’. When a city was built around a university that has 20,000 students, don’t you think 99% of issues ‘affect students’????”

“The students make this city,” Caitlin continued, “Take us out you lose everyone who is employed at the University, which leaves you without enough to even call yourself a city. Dave Cull, Dunedin Mayor, it’s time to take the student voice into consideration.”

Caitlin wanted OUSA to “sit on every committee that discuss anything that could directly, or indirectly, affect students. Our voice needs to be heard!”

Caitlin’s comments whipped up a storm of upset people.Dunedin Mayor Dave Cull responded to Caitlin’s article, saying that “while I admire [Caitlin’s] passion, my recollection of our discussions varies from hers”.

He said that “students and the University (as well as the Polytechnic and its students) are vital to Dunedin. Sure, you are important to the city’s economy, but you also bring youth, vibrancy, a spirit of academic enquiry and energy to our community. We love that.”

He went on to list things that the DCC do for students, including recycling and rubbish collection, internships, and helping with Hyde Street. “However, we expect public areas to be treated with respect in return. I know it’s only a small minority who smash bottles on footpaths, but that behaviour makes ratepayers in other areas ask why we give students special treatment. On the other hand, I was immensely proud to see a large group of university students last year respond to the pleas of preschool students by organising a clean-up of broken glass on Castle Street.”

He concluded by saying that “We see you, our students, as an integral part of our community. For those of you from outside Dunedin, we welcome you here as new citizens, not as temporary visitors or tourists.”

OUSA Postgraduate Officer Kirio Birks also disagreed with his President’s article, and called Caitlin “stuck up”. In a letter to Critic he said “The Dunedin City Council cares about OUSA, cares about students, and cares about the youth,” and that “Sitting on every committee is both absurd and a genuine waste of everyone’s time”.

“ Local government change is made with courtesy, integrity, perseverance and humility. Be stuck in, not stuck up”.

In her next President’s column Caitlin apologised to those who misconstrued the point of her article, saying that “the tone and wording of that article went too far and missed the point I was trying to achieve. I did not set out to lay a personal attack, but I can see how it could appear as one. For that I am sorry”.

However, she went on to say that, “as the President of a students’ association, my sole purpose is to represent the concerns and ideas of students. The intention of my article was to start a conversation about student opinion being valued in the decision making of our city. While I may have been too passionate in getting my message across, I encourage the DCC to consider students and what we have to say.”

“I will now turn my focus to building a better relationship with the DCC, so student issues won’t fall on deaf ears.”