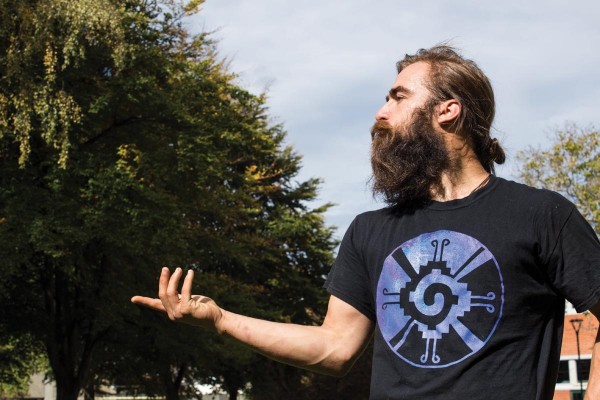 Success! Josh Smythe, OUSA Re-Creation Officer, has had his quarterly report passed, granting him his honorarium for the first quarter.

Josh’s report, which was covered in Critic #6, was dedicated to “the breathas and the homies,” insisted on listing his title as Re-Creation Officer instead of Recreation Officer, and contained lengthy ruminations on drug legalisation. The big old meanies on the exec refused to accept his report and demanded he re-submit it before he could get paid.

Which he has. And it’s pretty much the same. Except longer, with even more about drugs.

“I addressed concerns, made quantifiable goals, took out the emojis, and used appropriate titles,” said Josh, beaming with pride.

One of his quantifiable goals was “attending no less than three significant student events per week during university weeks”.

“Look at the way you’ve just denigrated parties,” said Josh. “I don’t drink, I connect with people. I’m not gonna neglect my duties guys. I have so much energy.”

When asked for an example of something useful that he had learned from interactions at parties, he said “people want more Hyde tickets. Maybe we can do Hyde and Leith next year”. The conversation was immediately shut down.

“I don’t have a problem with Josh going to parties as long as he does 10 hours of other work,” said Sam Smith, Finance Officer, reasonably.

There was concern that a passage of Josh’s report, which read “I feel that the majority of issues with student culture (violence, sexual violence, property damage, rubbish, self-harm, isolation, depression, anxiety) can be DIRECTLY and concretely linked to the effects of alcohol abuse,” was problematic.

Cam Meads, Administrative Vice President, said that linking alcohol and sexual violence was “quite offensive”. “I have a concern with the third point, where you say ‘I feel the majority of issues can be directly related to alcohol abuse’. I’m not happy accepting a report that says sexual abuse and depression are related to alcohol abuse.”

There was some confusion that the term “directly linked” implies that alcohol is the only cause of these issues, potentially removing blame from the perpetrators.

Josh said that was not the intention of the line. “I’m just observing a direct link,” he said.

“To address this as an issue,” said Josh.

“It doesn’t,” said Tiana Mihaere, Te Roopū President, who is a med student.

The agreement was that Josh would take out all the things listed in his brackets, which kept the point of the sentence, while taking out passages that were debatable.

Cam had another point to bring up. “You said there are alternatives to alcohol, and that LSD has potential healing powers. Are you suggesting that as the alternative?”

“The science is behind it, man,” said Josh.

Caitlin got so bored that she changed the subject and moved to pass Josh’s report with small amendments. It passed unanimously, and only after it was too late was it revealed that he had still managed to sneak an emoji in. Josh said that he’d fix it “out of the goodness of my heart as a non-binding decision”.

Critic noticed that they also missed one instance of the term “re-creation,” which remains undetected to this day.