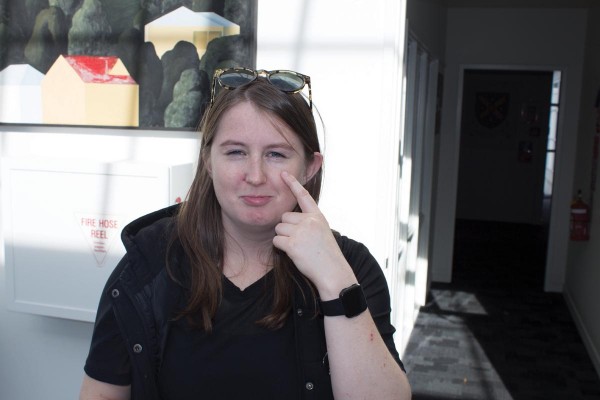 Critic refrains from using a single fish pun, despite thinking of several very good ones.

OUSA President Caitlin Barlow-Groome has been in mourning this past week after her beloved pet fish were eaten alive by her flatmate’s friend. The gruesome mouthal assault occurred after her flatmate and his friend had been drinking alcohol and perhaps swearing. The friend menacingly plucked the poor little fishy from the tank and “dropped it in his mouth and chomped it”. Both of her pair of fish, of which there were two, died in the attack and their fishtank was smashed. She had possesed the fish for four weeks before their tragic demise.

Caitlin said it was “disgusting” and that she was “disappointed that people I trusted would let somebody eat my fish”.

“They were one of a kind,” said Caitlin, with profound sorrow in her eyes. “I was never planning on eating them.”

The fish were called Mongey, “named after the Mongrel Mob,” and Kingey, because “all the flat used to drink Kingfishers”.

Caitlin said she was having a meeting with her flatmates tonight. They “owe me $170 for the fish tank and the fish need to be replaced,” although she admitted that “they can replace them with some crumbed fillets if they like”.

Critic thought that Caitlin might be on the Animal Ethics Board, and that we could make a joke about it. It turns out we were confusing it with the Animal Practice and Compliance Committee, which is an entirely separate thing apparently. “Just lie and say I sit on it,” said Caitlin. Critic swore a blood oath that we would take her lie to our graves.

Erin, Critic Designer, said “That’s so fucked” (“Don’t print that, now my mum will know I swear”). Saskia, Critic Illustrator, said that “I wouldn’t have bitten the fish, I would have swallowed them whole”.

Would you kill someone who ate your fish? Critic encourages you to write a lengthy letter on the subject and send it to editor@odt.co.nz.