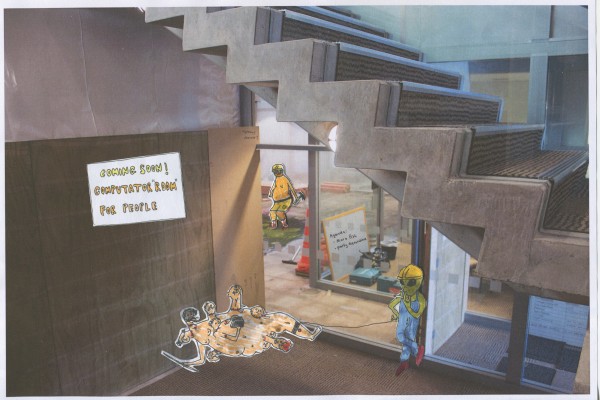 Wild Unfounded Speculation on what the University are really building in the Central LIE-brary.

In recent weeks a sinister Wall has emerged on the bottom floor of the lie-brary, where the computers used to be. The Wall has been painted black, with strange runic symbols daubed in invisible ink, and white plastic, the colour of white, girdles its extremities.

A pair of large double doors have been installed in the middle of The Wall, as if whatever gurgling monstrosity might burst forth needs more space than a humanoid.

One student said that he’d seen a ghostly red light seep under the Wall and strange shadows contort on the white plastic, leaving scorch marks where they fell. Or he might have been talking about something else, we weren’t really listening.

With the full might of Journalism at our backs we speculate about what the University might be doing:

As this article was being birthed, someone pointed out that while going up the lie-brary stairs, and on the mezzanine, you can see a small portion of Inside the Wall. Critic considers this peeking and thinks anyone doing it is very naughty indeed.