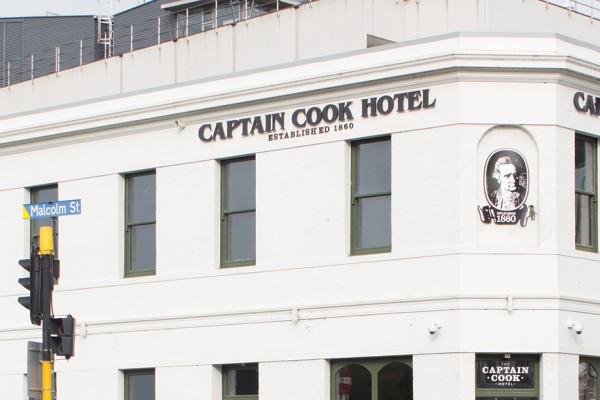 The Cook Re-opens Under New Managment

No word yet on the return of the legendary Cook Draught

On the corner of Albany and Great King Street, a Dunedin legend has lain dormant. Until now. Kicking off with a Connan Mockasin gig on February 2nd, the Captain Cook Hotel has officially re-opened under the management of Michael McLeod.

The Captain Cook Hotel was established in 1860. Hopefully not too many people remember back that far, but everyone who has lived in Dunedin has a space in their memory for the Cook. For most current students, it’s that place that hosted a few Critic blind dates, had a few good gigs in 2016 and 2017 and a very sweaty dance floor. For medium-term residents it was a top-40 disco bar, and then was shut for ages. But for people who were here for the good old days, the Cook was the home of good music and dirt-cheap drinks.

My aunt, who was at Otago in the ‘80s, remembers the Cook as somewhere she spent “way more time than I should have”. The drawcard was “cheap alcohol”. A friend’s mum remembers the Cook as a place to “roll into after lectures or at least by 8pm hoping your mates were there too. Pre-loading wasn’t a word . . . you would share $4 jugs of Export Gold with your mates and the 12oz glasses would make their way back to our flats, smuggled out in duffle coat pockets. I feel really sad that students these days don’t have those iconic pubs and experiences that we did. I wouldn’t trade it for anything.”

Although Michael McLeod said “never again” after leaving vegan cafe and weekend venue Circadian Rhythm in 2005, then “never again, again” after taking over Chick’s Hotel, another iconic Dunedin music venue, in 2012, he’s back for round three with the Cook. He told Radio One that he sees “a big lack” of a venue in Dunedin “that’s very central, in a nice little triangle between the university, the north end of George St and the hospital”. He says the landlords “are active and supportive and have the funds to pay for the kind of things that a commercial building needs”. He’s optimistic the Cook will reclaim its spot in Dunedin’s heart.

As a musician himself, McLeod’s focus will probably be more on the music than the cheap booze. “I’ve heard of the Cook being the home of Dunedin music. I was recently talking to such luminaries as Dave Dobbyn who fondly recalled his first shows there with Th’ Dudes. It was a very different venue; James K. Baxter used to hang out there . . . I would very much like to make it that style of venue again.”

However, McLeod says that it will have a “different ethos than the Cook I remember as a younger student . . . [there] won’t be any crate days, no Cook-a-thon, no gambling, although perhaps I might play poker there with my friends after hours.”

It will maintain the emphasis on craft food and drink that the previous iteration had. “Downstairs has had quite a significant refit and is going to be more of a restaurant and craft beer bar.” With culinary master Michael Coughlin as executive chef, downstairs will have a “gastropub style, befitting the history and current fit-out of the place”. Once the year gets underway “there’ll be a full restaurant with a lunch and dinner menu and Sunday brunch”.

McLeod is nervous about facing the Cook’s mythic legacy, but he says, “I’m going to give it my best shot and I’d like to think that people in Dunedin will enjoy it and come out and support it.”