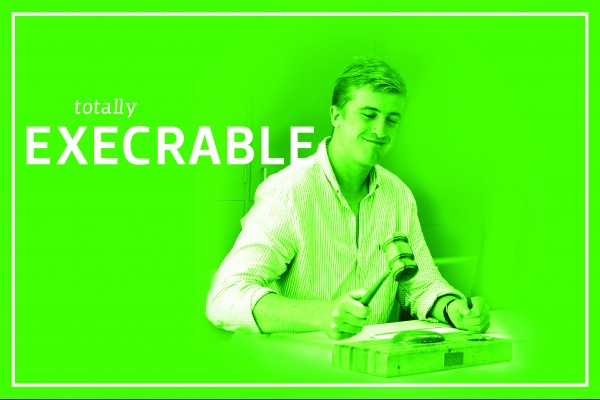 The ongoing debate over whether OUSA’s ‘Executive Travel Expense Policy’ is too frugal continued into Tuesday’s meeting, as Administrative Vice President William Guy reported back on the travel policies of other students’ association executives across New Zealand. Victoria University of Wellington Students Association receive nothing for travel purposes, while Auckland University Students Association has a “more liberal approach”, considered to be 3-star accommodation - roughly $120-200. Finance Officer Cody Kirby said he believes the association’s status-quo ($100 per person per night) is “fine”, with Education Officer Bryn Jenkins saying that $100 is “okay for a backpackers.” Guy asked the group whether we should be treating the Executive like staff, to which CEO Debbie Downs clarified, “it is not appropriate for staff to stay in a backpackers.” The policy was kept at $100.

NZUSA have caused a stir among the OUSA Executive by essentially outsourcing OUSA’s involvement in the student movement Thursdays In Black (TIB), whose main aim is to work “towards a world without rape and violence”, to ‘Students Against Sexual Violence’ (SASV) without consulting with them. Colleges Officer James Heath said it is “not okay [for NZUSA] not to meet with us to discuss it”, and Guy said that “by not consulting with us about this...it undermines us.” Postgraduate Officer-elect Kirio Birks, who attended the meeting alongside several other incoming executive members, said that OUSA should have a “part in choosing who from SASV runs it”. Recreation Officer and President-elect Caitlin Barlow Groome wanted to see the group affiliated to OUSA in order to be able to have a say in how it’s being run. Welfare Officer Danielle Pope said she’s seen a shift in their mindset from activism to “focussing on solutions and helping to consult on policy”, believing it showed growth and how they are happy to work with the association. We will continue to follow this story as it progresses.

Pope then spoke about the importance for OUSA to provide a submission to the university in relation to the recently released proposal for a ‘Management of Change’ for Student Health. If the proposal is implemented in its current form it will see redundancies for seven staff members, but the university claims it will change the focus of the service to better address a five year increase in levels of student distress. In their place, seven new positions will be established to provide support for the student body on this issue. Pope asked if the rest of the group could inform their various committees of the changes and get their feedback on the proposal to ensure student consultation is provided to the university. Barlow Groome also wanted to provide a submission on behalf of the incoming executive as well.

The group have also chosen to change their weekly meetings to fortnightly ones because of the upcoming exam period.