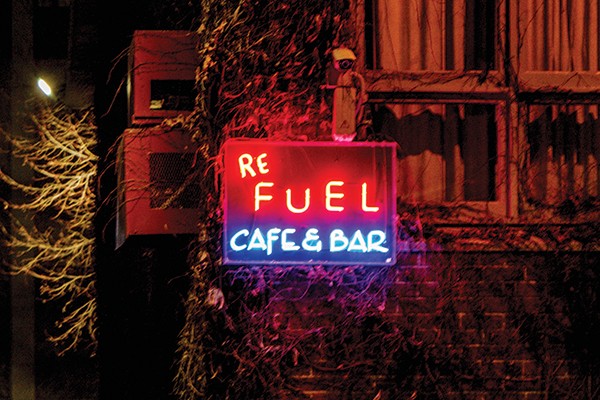 Re:Fuel Accused of Not Protecting Customer After Assault Complaint to Bouncer

Re:Fuel has been accused of not doing enough to protect the safety of its patrons, after one student was assaulted even after requesting help from bouncers several times.

Jack Brazil says he was out at pint night two weeks ago with some friends. “It basically started in the line to Re:Fuel. We were sardines as per, then this guy started calling my friends sluts and all these other slurs. I just said ‘whoa mate no need for that!’ And he then started at me, ‘are you one of the girls’, ‘wait til we get inside and I'll sort you out.’”

Once they were inside, Brazil says the same person started “aggressively threatening” to ‘take him outside’. “I just straight up went to the bouncers to explain what was happening. They ended up chatting to him and telling him off, quick slap on the wrist kinda thing. All the while he's saying all these homophobic slurs.”

He then said that after the bouncers left he was grabbed in a headlock and punched in the face. He then went to the bouncers again, but was told, “We can't do anything until we see something”.

It was only after the person tried to start a fight for a second time that they were finally removed, but Brazil said that only fired up the person’s friends, who then started abusing him with even more vitriol.

“We tried to avoid it, but he kept coming at us, at which point he said something just so gross I threw my drink in his face. The bouncers grabbed me and were like you've been nothing but trouble tonight stirring shit up. [There was one] who seemed to have a really big problem with me, low key homophobic vibes … this kind of thing has been happening to me since first year, and was way more intense the more flamboyant I was.”

This is not the first time that Re:Fuel has had trouble with violence. Campus Watch was called to control an approximately 15-person fight outside Re:Fuel in April this year. According to Proctor Dave Scott, “Campus Watch assisted outside the Union on the night referred to, and spoke to a group of males who had behaved abusively towards another individual outside the building”.

Facebook reviews for Re:Fuel included one other attendee with a similar complaint. “Some young messed up kid wanted my space in the front. No bouncers anywhere to be seen. Next thing I have a bloody nose and off to hospital. Not impressed as he was not removed.”

General Manager Stephen Baughan defended his staff’s actions, saying: “The security staff at Refuel are well trained, and do a great job. They have looked after over 5000 patrons this semester in Re:Fuel or at Re:Fuel related events. Sometimes intoxicated or belligerent people arrive and can be disruptive or confrontational in their behaviour. It is our policy that, in these situations, security staff will intervene when they are able to do so.”

He also said there were “Conflicting reports about this series of events being portrayed. These are being considered. In the meantime, the Union Management would be happy to meet with the complainant to discuss their concerns.”

Brazil tried to attend pint night the following week, but was denied entry. “I tried to plead my case, but they were like ‘it's your word against ours’. It's only a week ban, but still a hassle,” he said.