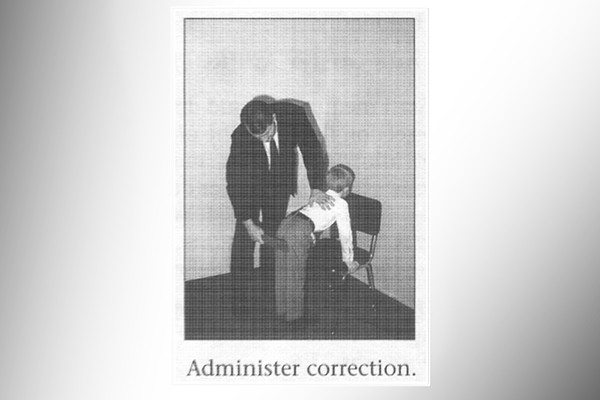 Opinion: The Deliberate Flouting of the Crimes Act at Auckland’s Drury Christian School

Last year, I wrote an article on the horrors of Accelerated Christian Education (ACE), a fundamentalist American homeschooling programme being taught in homes and schools across New Zealand. I discussed how ACE upholds the belief that the Bible is literally true, that there should be no distinction between church and state, and I also briefly touched upon the topic of corporal punishment.

Fundamentalist schools have a marked propensity for physically abusing their children. This is hardly surprising, as these schools are just the extreme conclusion of a theology that believes children are evil by nature, and that physical punishment is the solution. According to ACE, “the nurture and admiration of the Lord requires biblical discipline”. ACE even published instructional guides on how to properly spank a student with a paddle (known colloquially in some schools as the “Board of Education”). I sincerely regret that I did not devote more time and energy to researching allegations of corporal punishment occurring at Drury Christian School in Auckland.

Never heard of Drury Christian School? As an ex-pupil of this school, and survivor of ACE, I envy you. Drury Christian School is a homeschool co-operative, based in Auckland. As proudly outlined on their website, they are a “registered, private primary and secondary school,” where “all of the staff have completed an A.C.E. training course on Christian education”. Quite apart from forcing racist, patriarchal values and misinformation upon hapless students, Drury Christian School is infamous for exploiting a loophole in the anti-smacking law.

Corporal punishment in New Zealand schools was abolished in 1987, and legislatively enforced in July 1990, with Section 139A of the Education Act 1989. Section 139A prohibits anyone employed by a school or ECE provider, or anyone supervising or controlling students on the school's behalf, from “using force by way of correction or punishment towards any student at or in relation to the school or the student under their supervision or control.” Physical assault charges may be levelled at teachers who administer corporal punishment, resulting in termination and cancellation of teacher registration, and possibly criminal charges, with a maximum penalty of five years' imprisonment.

However, the law had a loophole: parents, provided they were not school staff, could still discipline their children on school grounds. In early 2007, it was revealed that Drury Christian School was sneakily using this loophole to discipline students by corporal punishment, by making the student’s parents administer the punishment.

The Crimes (Substituted Section 59) Amendment Act 2007 effectively closed this loophole in May 2007 by enacting a blanket ban on parents administering corporal punishment on their children. I vividly remember my father ranting and raving about the government’s interference into private family matters. When NZ First took out a whole-page advertisement in the NZ Herald to criticise the “anti-smacking bill” (as it was colloquially called), my Dad pinned it up on the fridge. My Mum and Dad carried on smacking us behind closed doors, and eventually the furore died down across the nation. But did Drury Christian School change its ways? It seems not.

Drury Christian School’s prospectus from July 2009 reveals that the school continued to encourage child abuse. In a section ominously titled “GUIDELINES FOR CORPORAL CORRECTION,” one may read how “corporal correction” should be considered for “repeated bad behaviour”. While the author admits that “in New Zealand, there is a strong feeling against corporal correction,” they go on to argue “humanism is also strongly opposed to Biblical standards, and has made no effort to see how well a disobedient child responds to a smack administered fairly and in love”. What follows is truly horrendous; a step-by-step guide to smacking children, stating, “a thin paddle is best on the bottom or the hand”.

This prospectus stayed online until at least December 2015, according to Dr Jonny Scaramanga, an expert in Christian fundamentalism and ACE. In 2016, Drury Christian School updated its website. However, the updated version still referred to corporal punishment, arguing that “in serious cases [of bad behaviour] there would be corporal discipline (administered by the parent), probation for a period or finally dismissal from school”. This particular wording remained until at least November 2016, when it was last archived by the Wayback Machine, a digital archive of the World Wide Web. Dr Scaramanga says that “When the page was archived again in May 2017, the reference to corporal punishment had been removed—ten years after it was legally banned”.

Corporal punishment, by its very nature, is intended to cause physical pain on a person. It most often occurs when there is a substantial disparity of power between punisher and punished. My parents certainly did not spare the rod with me, and I believe the regular ‘spankings’, which sometimes escalated into something more, damaged me irreparably. I hate to admit it, but I have a nasty, violent streak in me at times, and I often shy away from physical contact, instinctively expecting something worse.

I understand that not everyone agrees with the blanket statement that spanking is immoral. However, those who think it is appropriate at times should be aware that spanking frequently turns into more serious abuse. In my opinion, violence against children cannot be justified. Plutarch once said that “children ought to be led to honourable practices by means of encouragement and reasoning, and most certainly not by blows or ill-treatment”. Surely praise and reproof are more effective and humane. “Spare the rod and spoil the child,” is abuse, plain and simple. Drury Christian School should be held to account for the damage it has inflicted upon its students.