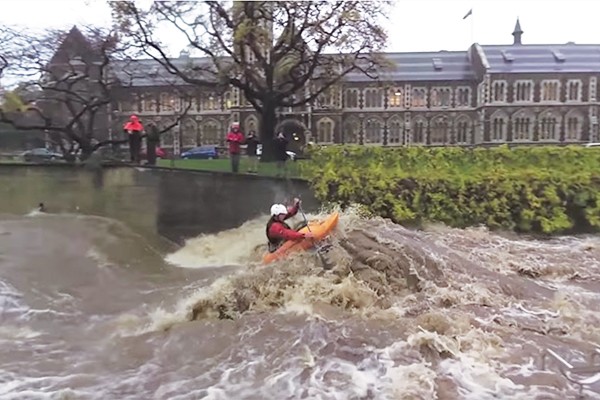 For some Dunedin residents, the recent flooding was a major disaster, putting homes at risk and straining emergency services beyond capacity.

But for the Otago University Canoe Club (OUCC), it was a cause for celebration. When the Leith River floods, it becomes perfect for white water kayaking, and their members rush out the doors to take advantage of the rare chance to ride some water in their own backyard.

OUCC member Fergus Farrell was one of a contingent of paddlers who took on the river last Saturday. “It went really well for the first couple of laps,” he said. “Myself and two mates had some problems with a hydraulic [a ‘hole’ which forms when the water flows over a submerged object] later on and had to kick into safety mode, but we got everybody out safe and sound. Always good when Leith goes!”

The paddlers entered the river just below the boulder trap off Woodhaugh Street, and rode the river along through the university, exiting near the Commerce Building.

When the river is flooded and the water is rushing through, what is normally a gentle stream becomes a dangerous torrent to manoeuvre. The International Scale of River Difficulty classes whitewater into six categories, from Grade 1 ‘Very small rough areas, requires no previous skill’, to Grade 6 ‘Rapids that are not passable and any attempt to do so would result in serious injury, near drowning or death’.

Fergus estimates that, at its full capacity, the Water of Leith is about a Grade 3 (requiring ‘Experienced paddling skills’). However, he says, “The problem is that the consequences can be quite bad due to the concrete sides and the incredibly fast flow. We will only let kayakers from our club on the Leith if we're confident that they can do it safely. Often this means that they need experience in Grade 4 or higher [requiring ‘Advanced Whitewater Experience’] “

The last chance the club got to paddle the Leith was in July 2015, when footage of kayakers powering past the university clocktower went viral and received national and international media attention. “We just really love the Leith because it's in our backyard and has a great novelty factor about it.”