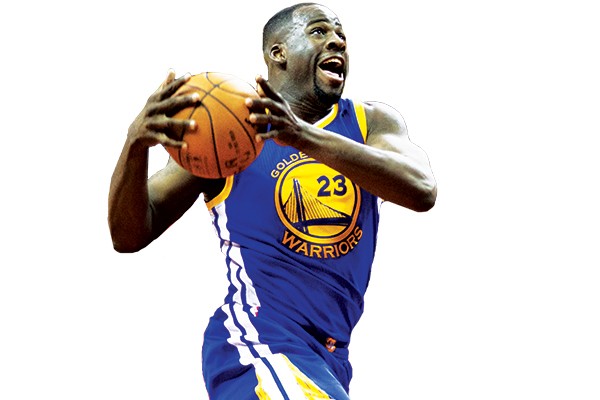 This could very easily be an article in itself. The man sits on stage alongside the likes of Steve Smith, Quade Cooper, Bernard Tomic and Justin Gatlin for the most hateable person in sports, and he probably takes out the prize.

Affectionate Warriors ‘fans’ (est. 2015) will amicably refer to Draymond as a player with ‘hustle’. This ‘hustle’ involves kicking players like our beloved Steven Adams in the nuts, talking copious amounts of shit about the greatest player in the world, LeBron James, that he couldn’t possibly back up, and flexing on his opponents when he finishes the easiest of layups.

The fuckwit clearly has a chip on his shoulder the size of his donkey mouth after sliding to mid-second round in the 2012 NBA Draft (35th pick, for the record), and he makes sure everyone and everything knows it, from Adams’s and LeBron’s crown jewels to the referees. Best example of karma I’ve possibly ever seen was Game 4 of the 2016 Finals, where he accumulated enough technical fouls to miss Game 5. If there was anyone to blame for the Warriors collapsing in the finals and missing out on history, it was Green. The Cavaliers were dead in the water after Game 4 and LeBron seemed to have given up on the prospect of beating the Warriors, but Green gave ‘The King’ and the Cavs new life in the series.

You get this in every sport, clearly, but the Warriors fans have got to be the worst of all. Four years ago the Warriors were a genuinely terrible team, nowhere near the playoffs and nowhere near being relevant in the slightest. But don’t let their fans know that. Seriously, they won’t know. In their minds, the Warriors were formed as early as 2014 and took over from the Charlotte Hornets; players such as Jason Richardson and Baron Davis are unheard of.

Conveniently, the rise of the California-based Warriors coincided with the fall of the Los Angeles Lakers. You do the math. Just as with Liverpool fans, please don’t waste your time trying to discuss basketball with Golden State fans.

In the summer of 2016, Kevin Durant made one of the weakest decisions in basketball history. No hyperbole. Last season, the Warriors went 73-9 in the regular season, breaking Jordan’s Bulls’ record of 72-10. Before choking and relenting a 3-1 lead in the Finals, the Warriors were on track to win back-to-back titles. KD really promoted the weak “if you can’t beat them, join them” mentality here.

Moreover, Durant’s Oklahoma City Thunder were 3-1 up against Golden State in the Western Conference Finals before he went cold and lost his team the series. They were that close to beating the Warriors and facing up against LeBron and the Cavs in the Finals. Truth be told, I don’t blame him one bit for leaving OKC to play on a different team with better ball movement, but not the Warriors fam. Now, when I watch them destroy teams by 40 points and showboat on the sidelines, I have to watch one of my, previously, favourite basketball players join them. Now when I watch Klay Thompson drop 60 freaking points in 29 minutes, or Steph Curry routinely draining 30-foot three pointers, I have to watch KD cheering them on.

If you aren’t a Warriors fan (good decision) then watching them play is fucking shit. Most of their offence comes from one of the two ‘Splash Brothers’ posting up from 40 feet and draining three-pointer after three-pointer.

I hate to sound like a hard-nosed, old time basketball purist, but you have to wonder if the Warriors are damaging the future of basketball. Steph Curry has an unprecedented gift for shooting the basketball at a high rate from preposterous distance, but fans have to realize that he is a once in a lifetime talent. Now, as a result of Curry being one of the league’s more popular superstars, young kids want to play and score just like Steph. Shooting 30-foot three-pointers is certainly more exciting than learning how to post up and properly defend and while shooting is an important skill to teach young basketball players, it is just one of many fundamentals they need to learn in order to become well-rounded and versatile players. The NBA is without a doubt becoming a shooters league, but let’s hope that post up play doesn’t become entirely obsolete.

Since the Warriors are such great shooters, they start celebrating shots before they even go in. Steph Curry shimmies down the court after made shots. The coach Steve Kerr complains about officiating in wins AND losses. Their bench is the most obnoxious bench in the league. Draymond Green gets in the opposing player’s face every chance he gets. In the middle of the 2015-2016 NBA season, we saw the unbelievable arrogance of the Warriors owner, Joe Lacob. He went to an interview with the New York Times and said that the Warriors are “light-years ahead of the rest of the league”. I understand that you just won your first NBA championship in 45 years, and you are on pace to break the regular season wins record, but saying you are “light-years” ahead of the rest of the NBA is as arrogant as it gets. Look, don’t get me wrong. The Warriors are clearly a great team, and their recent record speaks for itself, but there’s still oh so much to hate about them.