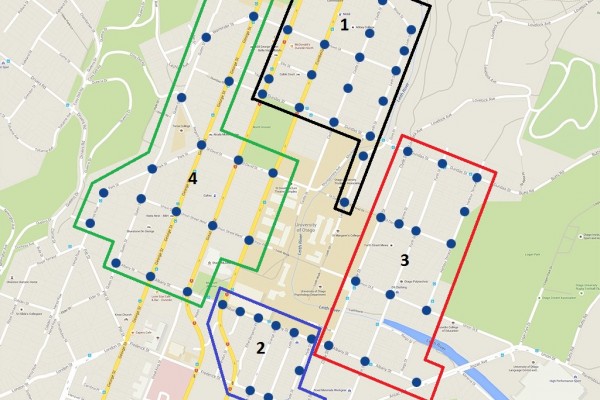 Cameras Will Spread Outside of Campus Grounds To Residential Areas, Though Several DCC Councillors Remain Unaware of the Plan

A procedural mistake made during the latest OUSA Executive meeting (Monday 8 May) has provided Critic with an unintended and exclusive insight into Otago University’s controversial plans to drastically increase the amount of closed-circuit television cameras (CCTV), the large majority of which will be located outside of the University’s campus.

These plans involve implementing 60 extra CCTV cameras through four phases at a total cost of over $1.2 million, a figure that does not include ongoing maintenance.

The first of the of four phases to be implemented (see map) will see 17 cameras being installed in the ‘north zone’, with five on Castle Street and seven on Leith Street North among others; the second, ‘south zone’, will total 10, spreading along Albany Street, Hyde Street and Frederick Street; the eastern zone, with 14 in total, include four cameras as far east as Harbour Terrace; the fourth, most numerous, and the last phase to be implemented, will involve 18 cameras, which will be spread from the top of Albany Street to the corner of Warrender Street and George Street.

Although the university has been working on this plan since at least 2015, Otago University have stated they “are still waiting to hear back from OUSA, what form they wish this to take. However, we are also looking at other ways to communicate with a potentially wider body of students who may not be represented by OUSA...Discussing this plan with Critic is one step in this process.”

Despite several meetings with Proctor Dave Scott, Vice Chancellor Harlene Hayne, and weekly communication with the Otago University Communications Office, Critic has not been approached nor spoken to in relation to this plan at any stage this year or last year. The only information we have received is that which we requested last week.

Apart from President Baird, OUSA Executive members had not heard of these plans until the meeting on Monday 8 May, with complaints being levelled at Baird for not having informed them of what Deputy Proctor Andrew Ferguson would be speaking about in the meeting.

Additionally, when asked to outline “specifically what form(s) of student consultation will be undertaken?” the university’s response was: “So far, the consultation discussions we have had have been with yourself, Joe [Higham], and also with Hugh and the student reps on council [of which the OUSA President is the only one]. We are currently trying to work out a way that students can have input – probably via student media, but also further discussion with student reps is welcome.”

“We would like to see what students think about the plan before we consider what we will do as a result of their feedback. At this stage, we are unsure what that feedback is, apart from a Facebook survey that has shown students may be in majority support of this initiative.” Critic informed Andrew Ferguson of this survey on Wednesday last week, the day before his response.

Now that their plan to increase CCTV cameras has been revealed, the sudden willingness for transparent student consultation has been called into question by some people given the wider picture.

The university claim that “following a long hiatus during most of 2016”, the final procedural step in this process was taken by the Vice-Chancellor’s Advisory Group (VCAG), who “approved the plan in principle” according to Andrew Ferguson. He went on to say that this “enabled further consultation to occur with the DCC, Police and ultimately students when they returned for the academic year.”

“The day of the [university] Council meeting, the Deputy Proctor also met informally with the President of OUSA, and outlined the concept, kicking off a consultation process with OUSA and students”, according to Vice Chancellor Harlene Hayne. That Council meeting occurred on 11 April, and though it began the consultation process with OUSA and students, Critic understands that nothing further was discussed with OUSA or students until Ferguson spoke at the Executive meeting almost a month later.

Additionally, the OUSA Executive called an emergency meeting to add a referendum question in order to gauge whether students approve of the implementation of CCTV cameras or not.

Critic spoke with former OUSA President (1979-1980) Paul Gourlie who disputes the claim that the university has been in contact with the DCC, claiming himself that he has spoken with a “handful” of councillors “who have not heard anything about this plan at all.”

He went on to say the failure to consult the student body before agreeing on this plan cannot possibly be true because, “It’s not credible in 2017 that the university would not consult students on this issue. If this is true, it shows a small, greedy, fear-driven group have taken control of our community” and wished to remind the university that “students are not demanding this.”

The group who approved this plan, VCAG, is, according to the university’s website, an “Advisory Group which comprises the Senior Management Team.” The group “meets twice monthly to consider strategy, policy and current projects and issues.”

The information provided on the University’s website for VCAG is minimal, with meeting minutes not being available publically. When Critic requested the VCAG minutes for the meeting in which this CCTV proposal was discussed and voted on, a screenshot was provided of the one agenda item, which read: “Received and Discussed. Endorsed a recommendation from the Chief Operating Officer that formal consultation commences covering the project as a whole”.

What The Next Week Holds

OUSA held an emergency meeting on Friday 12 May, in which they drafted a question to be included in the upcoming OUSA referendum. Once the meeting was over, the executive were seen walking over to the Clocktower to speak with Harlene Hayne altogether. What the OUSA Executive spoke to her about is currently unknown.

The added question is: "Should OUSA oppose the implementation of CCTV monitoring of the student residential area by the University of Otago?"

OUSA President Hugh Baird said that their reasons for adding this question were that: “As an executive it’s our intention to take the matter to the student body in the upcoming referendum to declare a clear mandate of the position of the students in regards to the cameras and to hopefully gauge the students’ concerns.”

Where Do They Stand On The Effect of CCTV Cameras On Crime Reduction/Deterrence?

The jury is seemingly still out among experts on the correlation between CCTV cameras and the decline of crime rates in that surveilled area.

University of Otago Vice Chancellor Harlene Hayne herself has said that “We are confident the cameras just by themselves will have a preventative effect on crime, and will provide a sense of safety, as reported in other cities where CCTV is deployed.”

During Baird’s presidential campaign he spoke out on several occasions about how, if elected, he would “work hard to ensure Otago students rights and freedoms” and that “North Dunedin does not succumb to liquor bans, party registers or CCTV cameras.”

The only insight into the student body’s views on this issue is an OUSA straw poll conducted in 2016, which revealed that from 466 total votes, 52 percent were in favour of the cameras, while 48 percent were opposed to them, meaning an extra 18 people voted for the cameras than against them.

The Campbell Collaboration, in a review of 44 research studies on CCTV schemes, found that “they do have a modest impact on crime overall but are at their most effective in cutting vehicle crime in car parks, especially when used alongside improved lighting and the introduction of security guards.”

An article in the Guardian Newspaper on this research said: "The review of 44 research studies on CCTV schemes by the Campbell Collaboration found that they do have a modest impact of crime overall but are at their most effective in cutting vehicle crime in car parks, especially when used alongside improved lighting and the introduction of security guards."

"The authors, who include Cambridge University criminologist, David Farrington, say while their results lend support for the continued use of CCTV, schemes should be far more narrowly targeted at reducing vehicle crime in car parks." That article can be found here: https://www.theguardian.com/uk/2009/may/18/cctv-crime-police

According to British Home Office-funded research, “the use of closed-circuit television in city and town centres and public housing estates does not have a significant effect on crime.”

An earlier independent report conducted by the British Home Office in 2005 stated: “It has been shown that the CCTV schemes produced no overall effect on all relevant crime viewed collectively.”

Inspector Jason Guthrie, Otago Coastal Area Commander explained that “Police support the use of CCTV, whether they are in public areas and managed by the Council, or if business owners and private citizens use them to protect their property.”

New Zealand University Students’ Association President Jonathan Gee explained that “the University should be extremely cautious when planning any form of extensive surveillance, particularly in student living quarters. I would expect that the university ensures students are meaningfully consulted and made specifically aware of the purpose of the surveillance and how it might be used by the university or third parties like the police.”

New Zealand Council of Civil Liberties media spokesperson Thomas Beagle said that having numerous CCTV cameras in an area worried him, explaining they are likely to cause “constraints on people”, making them act in a ‘middle of the road’ fashion because “people behave differently when they’re being watched.”

The DCC were unable to respond to Critic’s questions before the article went to print.