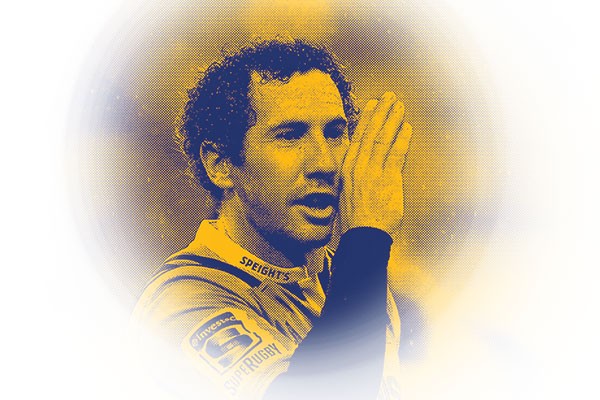 There are a few genuine folklore legends in this current Highlanders squad: Ben Smith, Richard “Barracuda” Buckman, Joey Wheeler… but perhaps the standout is the curly-haired assassin Marty Banks. I caught up with Banksy for an ice-cold Speight’s and chewed the fat. By God does the man love it down here in the Deep South, and it’ll be a huge shame to see him join Treviso in Italy after this season.

How did you get into rugby? Were there other sports you preferred, or any you have secret talents in now?
I played a few sports competitively growing up, but the main two were cricket and rugby. It was an easy decision in the end, as I wasn’t a big fan of playing cricket most Sundays with a hangover, or getting pumped to the boundary when I was bowling. Other talents I have… sleeping would be probably right up there... so if there are any competitions out there for that, I think I’d go pretty good.

What’s your go-to feed pre-game?
My go to feed... I’d like to lie and say it’s something exciting, but it’s just the standard —some form of carbs like chicken, pasta and a few veges. Don’t mind a bit of a treat so I throw some dessert in there on away games at the hotel or some chocolate at home.

What’s your drink of choice? More of a Speight’s man or do you enjoy a cheeky Diesel on occasion?
Easy decision, Speight’s hands down. There are pretty hefty punishments if you are caught drinking anything that isn’t a Speight’s product so I stay between the boundaries.

If you could combine three athletes for the perfect rugby player, who would you go for?
Cullen, Carter and McCaw. They don’t need much of an explanation, all of them have been at the top of the game and growing up I was a massive fan of Cullen.

Who’s got the worst banter in the ‘Landers?
Haha, other than myself, Ben Smith is pretty terrible most of the time. Joe Wheeler thinks he’s hilarious but he goes for the “safety in numbers” approach; he will jump on board with whoever a few of the boys are giving shit to, so even if what he says isn’t funny the group gets behind him and laughs.

Worst dressed of the boys?
That’s a tough one because most of the boys run pretty casual kit at the best of times, so to pick a worst dressed is difficult… Greg Pleasants-Tate would be one guy to back himself to foot it with the best dressed though.

What’s the dumbest moment you’ve seen from any of the boys in the squad?
Other than my failed grubber attempt in the Brumbies game (that I won’t live down for a long time) ... Joey Wheeler taking his kit off for Highlanders TV and standing next to Ben Smith probably isn’t the smartest idea going around; both are rugby players, but one of them looks out of place.

If you could have dinner with any 3 people, who would you choose and why?
Michael Jordan, for a player to dominate his sport like he did; it’d be pretty awesome to have a few awkward silences over dinner with someone as big-time as him. Tiger Woods, so he can give me an insight into how many holes he put his balls into on and off the golf course. Third would be Gordon Ramsey: firstly so he can cook, and secondly I’d like to listen to him go nuts at anyone within sight.

Who is your most-hated athlete or sports team currently?
Dan Pryor, I can’t seem to beat him in golf so that is a good enough reason to strongly dislike someone I feel.

Have you done any study in the past, or plan to do any(more) in the future?
I studied sport and exercise science at CPIT in Christchurch, don’t think I’ll ever study again, even though it looks like a hellova time the students have down here in Dunners throughout the year

Who are your inspirations in the sport, and is there anyone who you look to emulate and take pointers from? Basically, who have been the biggest figures in your career to date?
My family growing up was massive for my sport; mum was at every game, the brothers took me to all their games, and the sisters would give me hidings, so they all played a big part for me. I just try take pointers from the coaches I’ve had/have and I’ve been lucky enough to play alongside some of the best rugby players in the world which makes it hard not to pick their brains at times.

Anyone in the ‘Landers you’d like to use this publicity to take a shot at, or any stories you’d like to share?
Haha, it’d be a pretty lonely place at training if I took any shots at the boys, and to be honest it’d probably end up in me getting setup on the internet again which I don’t know if I’m ready for again! (Banksy is referring to this infamous video: https://www.youtube.com/watch?v=4TJ08XQwFcs)

One final question—who is the more iconic mascot? The Mako or Shaq the Cat?
100% the Mako—myself and a heap of the Tasman boys got the Mako tattooed on our body, so it’s a fairly easy answer.

Thanks for your time Marty, and up the Landers.