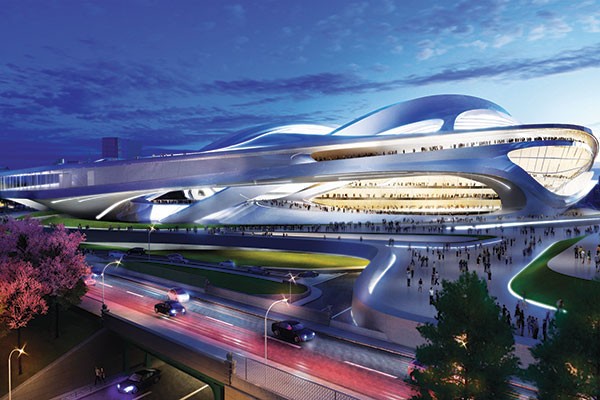 While One World Cup Is Going to Plan, Another’s Are Being Rewritten …

The 2015 Rugby World Cup is well underway in England and is running smoothly (just maybe not for England on the field) with record-breaking attendance that is making the most of England’s tried and trusted network of world-class sporting venues and transport infrastructure.

While World Rugby bosses are happy with how this year’s tournament is going, some nervous glances are already being cast towards Japan, hosts of the 2019 Rugby World Cup, as the ambitious redevelopment plans for their National Stadium in Tokyo have been scrapped due to out-of-control costs projected to double to well over $2 billion.

The new stadium was meant to be completed in time for the 2019 World Cup, acting as the centrepiece for the final as well as the opening and closing ceremonies. This late change leaves a big hole in Japan’s hosting plans.

A “Plan B” will likely see Yokohama Stadium, a 72,000-seat venue built to host the 2002 Football World Cup, staging the final, while the 50,000-seat Tokyo Stadium will host the opening ceremony and opening match.

Planners are still finalising their revised design, which is set to be finished just in time for the 2020 Olympics. The new stadium will need to fit in better with the vision for the “sustainable future” of the Olympics that the International Olympic Committee has been working towards over recent events.

The projected costs for the redevelopment of the new National Stadium — which hosted the 1964 Olympics — are quite shocking, considering that the brand new and imaginatively named Olympic Stadium in London was built for “only” $680 million (it is being used as a venue for the Rugby World Cup and will be tenanted from next year by local Premier League Club, West Ham) while the dramatic Bird’s Nest stadium in Beijing was completed for around $500 million.

The IOC is committed to a sustainable financial future for the games as well as to a modernisation of the sports that will be played at future events.

Japan has selected five new sports it would like to see included for 2020, sports that reflect the values and sporting preferences of Japan as a whole. The IOC is reviewing the application for these new sports and will make a final decision next year.

The new sports could add up to 18 medals and 500 athletes to the games, and the candidates for inclusion in 2020 are:

Baseball/softball
Was on the programme from 1992–2008 and is one of the most popular sports in Japan, so it is not hard to see why they would want it back. Japan won the softball gold medal in 2008.

Surfing
An increasingly popular sport in Japan among young people and would fit in with the attempts at modernising the Olympics with more spectator-friendly events. New Zealand has excelled in and on the water at the Olympics, so the inclusion of surfing could give us another realistic medal to target.

Skateboarding
Would go well with BMX racing, introduced at Beijing ’08, and possibly connect better with a younger audience. Could be included in a race format as well as an individual performance scored by judges.

Karate
There is probably no need to explain why the Japanese would want to include the most unmistakably Japanese of sports. However, with judo and taekwondo already on the Olympic programme, one of these may have to miss out to accommodate karate.

Sport Climbing
Both indoor and outdoor rock climbing are gaining huge followings among young people, but this remains the least organised “sport” of the five contenders, which will make it the least likely to be included.