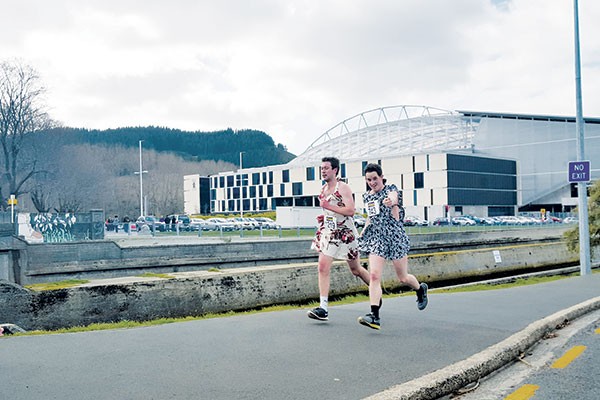 Thousands Run in the Dunedin Marathon

Nearly 2000 people took part in the 37th annual Cadbury Dunedin Marathon on Sunday 12th September.  A group of 21 Otago students used the event to raise $4,800 for the Do It In a Dress campaign, raising money for One Child - an education initiative for young girls in Africa.

The first person to arrive at the finish in just 2:45:40 was overall winner Romain Mirosa. He was closely followed by the quickest woman, Mel Aitken, who posted a time of 2:56:56. Tony Payne won the half marathon in 1:08:25, backing up his win in last year’s full marathon in style, while Rachel Kingsford set a new women’s half-course record with a 1:19:30.

All of the MSGA runners completed either the quarter or half marathon. The money raised will go towards upgrading school facilities, individual education scholarships and community health and sanitation facilities that all make it easier for girls to go to school.

Adele Macgregor, the Otago co-ordinator for the Medical Students for Global Awareness (MSGA), helped organise the fundraiser. MSGA is a nationwide network of medical students who are passionate about addressing health inequities on a local and global scale.

Macgregor was inspired to do the event after attending a conference in Sydney last year: “Chantelle Baxter, the founder of the One Girl charity organisation spoke to us and told us of her journey. Her story really hit home.”

The One Girl organisation works with young girls in Sierra Leone and Uganda, “which are some of the worst places in the world to be born female.” In Sierra Leone, as few as 1 in 6 girls are able to attend school.

MSGA plan on continuing their work with One Child in the future, adding “The dresses are being handed down to our second-year students, so I’m sure they will be doing something similar next year.”