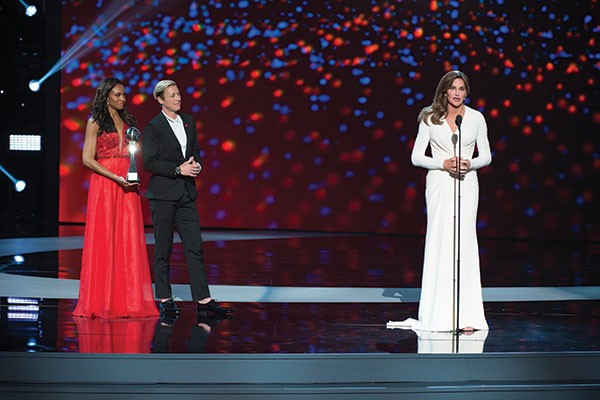 Acceptance and Equality the Big Winners at the ESPY Awards

The ESPYs (Excellence in Sports Performance Yearly Awards) are Hollywood’s “ratings-orientated” sports awards, which recognise people for sporting as well as humanitarian contributions to society and popular culture.

This year’s edition provided much “ammunition” for the wider community of “haters”, who disagreed with many of the award recipients and the “angle” of the show. There is no denying that there was somewhat of a “Girl Power” theme to the awards as the United States women’s soccer team beat out the NBA-winning Golden State Warriors, among others, to win the overall Best Team, having recently beaten Japan 5–2 to win the World Cup.

MMA fighter, Rhonda Roussey, continued her rise as a pop-culture icon by picking up two awards, first winning Best Female Athlete and then overall Best Fighter, beating out boxer Floyd Mayweather for the award. She used this as an opportunity to make a joke about Mayweather’s hideous history of domestic abuse, saying that it was “good for a woman to beat Floyd for a change”.

Kiwi golfer, Lydia Ko, edged out rivals Stacey Lewis and Inbee Park to pick up the Best Female Golfer award, but the world number one was in unfamiliar company as she was also up for Best International Athlete against Wimbledon winner and world number one, Novak Djokovic, F1 World Champion, Lewis Hamilton, and the greatest ever football rivals, Cristiano Ronaldo and Lionel Messi. For Ko to be nominated as the only woman in this category was a huge win in itself, but Messi ended up taking the award having recently won his fourth Champions League with Barcelona, although he has captained Argentina to consecutive defeats in the final of the Copa America and the World Cup.

The biggest moment of the night was when Caitlyn Jenner was awarded with the Arthur Ashe Award for Courage, which recognises “transcendent” public figures who have made cultural and societal contributions to the world. Previous winners include legendary boxer, Muhammad Ali, and even Nelson Mandela. Last year’s winner of the award was Michael Sam, an American NFL player who became the sport’s first openly gay player in 2014, and this year Jenner highlighted some of the rigid gender constructs of sports as being both a curse and a blessing to different members of the gay and transgender community.

Following Bruce Jenner’s gold-medal-winning performance in the decathlon at the 1976 Olympics, he became the epitome of masculinity for that generation, which is why many people probably found it hard to see Caitlyn up there in a lovely white Versace gown accepting this award. It was an award that had little to do with sporting achievements of the past but everything to do with becoming an agent for equality and acceptance of the wide and very colourful LGBT community.

No-one has ever made such a public transition before and, in doing so, Jenner has forced these sensitive issues to become front and centre so that society can finally deal with them, as we have with so many other things in the past. While the ESPYs will likely remain a rather hollow and meaningless sports award, its role in promoting awareness of bigger social issues will become more important in the coming years, and sports will continue to provide an important environment for positive social change.