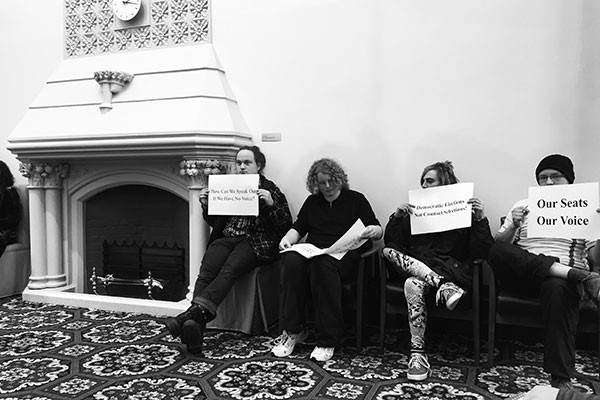 “In a Perfect World, the Minister Would Leave Us Well Alone”

The draft constitution, which was passed in a six to nine vote, reserved four ministerial seats, four “skills-based” seats and four seats made up from those within the university. These university seats are for one student, one academic staff member, one general staff member and the vice chancellor.

The altered constitution came after changes made by Tertiary Education Minister Steven Joyce earlier this year. The Education Amendment Act 2015 allows university councils to have a minimum of eight and a maximum of 12 seats. If a university chooses to have a 12-seat council, four of these must be reserved for ministerial appointments. There are currently 17 members on the council and up to 20 allowed at any one time.

The amendment has also placed a 12-year cap on individuals being able to serve on council. Should the vice chancellor continue in her position, her remaining time may take her over the cap.

The council suggests that the vice chancellor “has a right to be a member of the council regardless of how many years she has already served”. A two-year transition period was also suggested, as the previous legislation had a 16-year cap.

Ward said the “rationale” behind Joyce’s changes was to make universities “more commercial, more nimble” and “better able to make quick decisions”. However, Ward said he and Vice Chancellor Harlene Hayne “went on the front foot” and fought to “keep the situation as is”.

Ward said he is not convinced a reduction in the size of councils would have “any particular merit”. Nevertheless, “we are where we are, and we have to make the best of it”.

Forty-one individual and group submissions were made during the consultation period of the draft, which ran from the time the proposal was announced in May’s council meeting. Emails were sent by 718 students and staff in support of two student seats remaining. OUSA executive members also gained 1500 student signatures on a petition after door-knocking efforts in the weeks prior.

Seven students, including three OUSA executives, attended the meeting and held signs in protest. “Democratic Elections Not Counsel Selections”, one read. The incorrect spelling of  two of the protestors’ signs was unfortunate for a protest demanding decision-making power over a multi-million-dollar university.

OUSA President Paul Hunt and Recreation Officer Jonny Martin, who are the two current student representatives on the council, submitted amendments to the draft in Tuesday’s meeting. The amendments would add a second student in place of the fourth “skills-based” appointment.

Hunt said students “contribute to the input and output” of the university, and their voices are “vital”. He argued the university is “more dependent on its customers than any other organisation”.

Hunt received round-the-table support from fellow board members that student voices were important; however, the majority believed that due to the new legislation, one seat under the new constitution would suffice.

Dunedin Mayor Dave Cull said “ideally” there should “be more than one seat for students on the university council”. “However,” he said, “the changes imposed by government give us only twelve [seats] in total.” Therefore, there needs to be “as strong of a council as possible based on skill”. He said his seat should be “de-prioritised”.

Hayne said she “could not find fault in 99 percent” of Paul’s arguments, “you know that I truly do believe student voice is important”.

“In a perfect world, the minister would leave us well enough alone and we would go on with the council that we have,” said Hayne. “Sadly, despite my polite comments, and then my shouting, we are in the position we are now.”