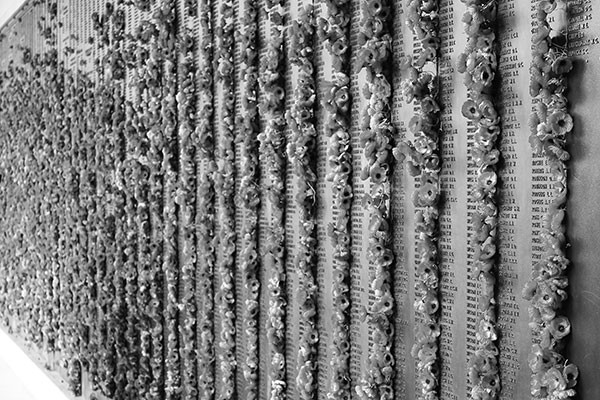 A University of Otago student was recently awarded his certificate for winning an international essay contest earlier this year.

Martin Holmes, a third-year history student, was announced as the winner of a worldwide competition for his essay titled “The World Needs To Change”. The competition, devised and delivered by the Islamic Conference Youth Forum for Dialogue and Cooperation (ICYF), focused on Gallipoli and its message for peace. Participants came from 38 countries around the world.

Martin was announced as the winner the day after ANZAC Day this year. Former New Zealand Governor General Sir Anand Satyanand travelled to Dunedin to award the certificate at the opening of Otago’s Foreign Policy School.

Holmes said he chose to write his essay, which is based on his great-grandfather’s view of the war, “to say something a little bit different about ANZAC Day and about what other people weren’t talking about in regards to ANZAC Day”.

“Everyone in New Zealand remembers the people that died, and the conscientious objectors, but not many people remember the angry men who came out of World War One very unpatriotic,” said Holmes. “They just weren’t recognised.”

Holmes believes this is because these men are seen as “not very patriotic … The people that died were very brave martyrs, the ones who developed shell-shock were very tragic, but the ones who became angry, bitter, and sometimes alcoholic, people don’t want to talk about [them].”

Holmes said he never expected to win the competition: “I was shocked … I feel quite honoured.”

One hundred years ago, my great-grandfather participated in the Gallipoli Campaign. He was a career sailor in the Royal Navy, and had already served over a decade by the time the campaign began in 1915, being promoted to the rank of Able Seaman. He was a kind, quiet man from the traditional, conservative county of Essex. At this time he was probably a religious man.

In the space of a few years, my great-grandfather changed. He watched the campaign unfold from the deck of his ship, seeing the guns booming and the fresh-faced ANZACs return from the beaches bloodied and wounded. It was then he began to change.

When the war ended, he returned to Britain and very soon found himself joining the Communist Party of Great Britain. He did so because they had opposed the war from the start, seeing it as an imperialist bloodbath that only served to turn foreign peoples against one another. My great-grandfather did not see why he should have fought the Turkish, and nor did he see why the Turkish wanted to fight the British. The war for him was exposed as a rich man’s war — for those who saw the world in terms of territory and resources, and who viewed the armed forces as mere instruments to be sacrificed for their goals.

What is remarkable about my great-grandfather is that this was not merely a phase — he remained a communist until the end of his life. In the 1920s he was discharged from the navy after he participated in a mutiny. He stopped going to Church, and although he accepted his pension (he had after all served much of his life in the Royal Navy), he scorned militarists who wished to make World War One into something heroic. For him, the only war left to be fought was the revolutionary struggle that would consign tragedies like Gallipoli to the dustbin of history. Until his death in the 1970s, he continued to speak his mind despite moving back to the conservative county of his birth, and until his death he wrote furiously to local papers about the crimes of capitalism, imperialism and the British Empire.

One can only wonder what he would have thought about the modern world within which we live. For what happened at Gallipoli continues to happen around the world. What would my great-grandfather have made of the Syrian Civil War? The ISIL? The Arab Spring? The Naxalite insurgency in India? He would have held the same views he developed watching the casualties being moved onto the hospital ships, as the guns on his own ship roared as the shells pounded the Turkish enemy he did not know and would probably never meet. He would have seen these wars as capitalist conflicts — as futile spats between power blocs over political influence and natural resources. He would have written letter upon letter to British newspapers calling them to leave the Middle East, and to report the truth about European imperialist meddling. He would have lamented that soldiers are still fighting and dying for nation states nearly a hundred years after his precious Bolsheviks had shown a new path for humanity, a new way of international brotherhood. Ultimately, he would be shattered that the situation had not changed since Gallipoli — except for weapons of technology, of course.

The views of my great-grandfather may seem dated. Indeed, they might seem utopian, or simply silly. But remember that he was there. He saw the Gallipoli Campaign before his eyes like you see the words before you on this page. Him — a career soldier who signed up at the turn of the century, who had worked his way up the ranks from a simple kennel boy, whose whole life was oriented toward King and Country. That experience permanently changed his entire worldview.

You might say that his ideas do not work, that the world he wished to build can only exist in fiction. But, at the same time, he is correct in saying this world does not work. A hundred years after Gallipoli, wars are still commonplace. People are still dying. World War One is held as the epitome of a futile, unjust war that should never have happened, but what about the ones since? Or the ones to come? If he was wrong then, he was only wrong in his methods because if Gallipoli has taught us one thing, it is that this world needs to change.