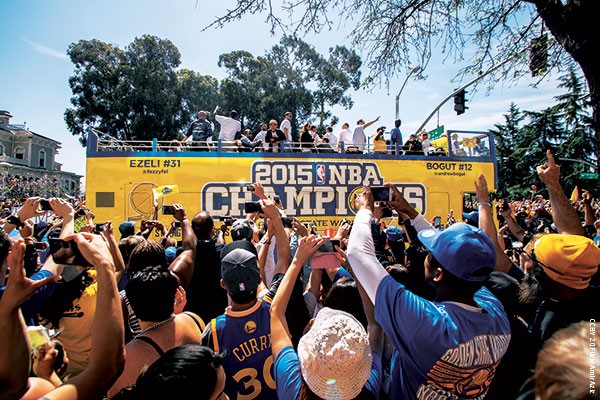 Cockiness by the Cavaliers doesn’t cut it

Expect to see a lot of new Golden State Warriors jerseys around campus this semester as the team from Oakland, California, just won its first NBA title since 1975. In doing so, they scuppered the dreams of long-suffering Cleveland Cavaliers fans, who were confident of winning their first ever championship following the return of hometown hero, LeBron James. It was looking good for the Cavs, who won two of the first three games of the series, but the Warriors came back strong, winning 4–2 and clinching the championship on the Cavs’ home court with a game to spare. The Warriors were helped to the title by finals MVP, Andre Iguodala, and the regular season MVP, Stephen Curry, who broke many three-point shooting records along the way.

This was a well-deserved title for the Warriors, who had finished sixth in their last two seasons, as they dominated their Western Conference with a record-equalling 67 regular season wins before going on to dominate their playoff series against the Pelicans, the Grizzlies and the Rockets to reach the finals for the first time since they last won the Championship.

It was nearly a fairytale return to Cleveland for James, who suffered a lot of jersey-burning abuse from game-loving, player-hating fans when he left the Cavs for his successful spell in Miami with the Heat. After a tough start to the season, the Cavs finished runner-up to Atlanta in the Eastern Conference before coming alive in the playoffs against the Celtics, the Bulls and the Hawks, losing only two of their fourteen playoff games.

However, in the finals the Cavs were outclassed by the Warriors, and it quickly became clear that LeBron was carrying the team, topping the Cavs’ stats for points, rebounds and assists in most of the games. He made the most headlines for accidentally exposing his penis on live TV as he “adjusted” during Game 4. LeBron’s “cockiness” during this game was the turning point in the finals series: the Warriors won to tie up the series, and the rest is now history. The next season starts in October, and the Warriors will look to go back-to-back for the first time while Cavs fans may have to say goodbye to James again; he became a free agent on 1 July so he can negotiate with other teams — maybe even the Breakers?