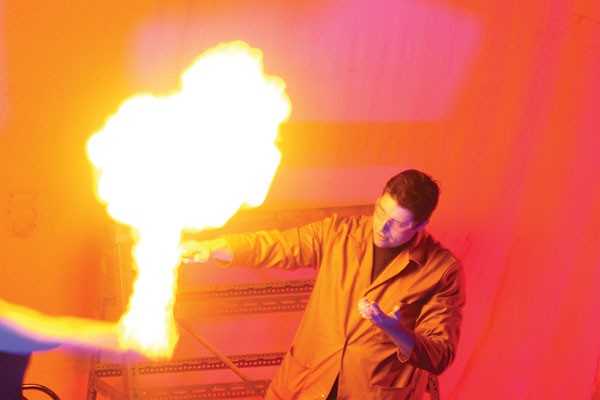 Interview with the organiser, Richard Barker

When I first talked to the Fetish Ball organiser, Richard Barker, I asked him to describe what exactly a fetish was. He laughed and said, “I would prefer you to go to Google for that.” I took to Urban Dictionary.

A fetish is “a sexual fixation or obsession with a usually non-sexual object. Eg. socks, horses, monkeys, pain, bondage … ‘Holy shit, those socks really get me turned on because of this sock fetish of mine.  *Rubs socks on body*’ ”

Barker said that in regards to the Fetish Ball, a fetish is “that which is not normal and is of interest, but not necessarily sexual interest.” Before I interviewed Barker, I attempted to do some research by googling “Fetish Balls”; every site was either blocked by the university proxy or was a Q&A forum about having a fetish for balls. I was going into this blind.

Would you say having a fetish is becoming more acceptable, or is it still hard to talk about?
I think it’s still extremely hard for people to talk about. Sometimes they fear, and it’s a very real fear, rejection from their friends, neighbours, employers or religious colleagues. For me it’s not hard to talk about because I am what I am, and I’m really proud of the suspension and associated stuff that I do.

Is that one of the reasons you have the ball?
Yes. The ball is definitely a place to introduce the public and the vanilla, which is the normal people in society, to some of the fetishes that are really available, and show them that they’re not such a horrific thing. It gives them a chance to explore some of the alternative things that are happening in today’s society in a safe environment. Plus it’s a chance for them to meet like-minded people.

What do fetishes at your events generally range from?
What the demonstrations include are impact play, electro play, hopefully some wax play and various forms of suspension. That’s the type of thing that you can demonstrate safely in public without too much danger. There’s a group upstairs, they represent a number of clubs in the Dunedin and Invercargill area. They’ll be happy to talk to people about their individual fetishes — examples may be cross-dressing or foot fetishes. The people there are skilled to talk about them and to introduce them to the right people.

You told us last year the most extreme act was the hook suspensions — how do people actually enter into that profession?
Well, there isn’t enough of it going on in New Zealand to be a sole career, so it’s sort of a hobby. How did I enter into it? When I was very young, I went and saw a movie called A Man Named Horse, and a group of us got together and thought “we can do that”, and we did it. But, then, I’m nearly 60; today there are various groups that they can contact and can learn how to do flesh-hook suspensions safely. For example, skinpuppets.co.nz.

You said you were younger when you realised you had a fetish. Did you find it hard to get into that profession? Was there a fear of what your family and friends might have thought?
Well, I never actually got into it as a profession, we just did it as a hobby. The group I was mixing with was all insane (laughs), so, no, we didn’t have any problems at all, we just thought it was a marvellous idea. So for our group it’s never a problem, but then I’ve always been an extrovert in telling people what I do. I’m an importer; a large number of my clients know what I do because they see something such as my suspension gear, which is normally my frames and block and tackle. They’ll go “oh, do you do climbing?” and I’ll go “no” and I explain to them.

What do you plan to wear for this year’s Fetish Ball?
I generally go along as a cowboy. I got tired of wearing leather costumes and spikes; I’ve discovered I quite like going along as an American cowboy (laughs). The spikes don’t get in the way now when I’m doing flesh-hook suspension. Secondly, it’s something different. My girlfriend is dressing as the Maleficent character from the movie. This is an adult dress-up party; you can come along as anything you like so long as you make an effort.

Is that a fetish of yours?
Fetish suggests that it’s a sexual interest (laughs). I’m not interested in sexually assaulting cowboys. But, yeah, I like wearing cowboy boots, I like wearing the 1930s gambler outfits, I like cowboy hats. I don’t think fetish is the correct word, but, yes, it’s my favourite dress up.